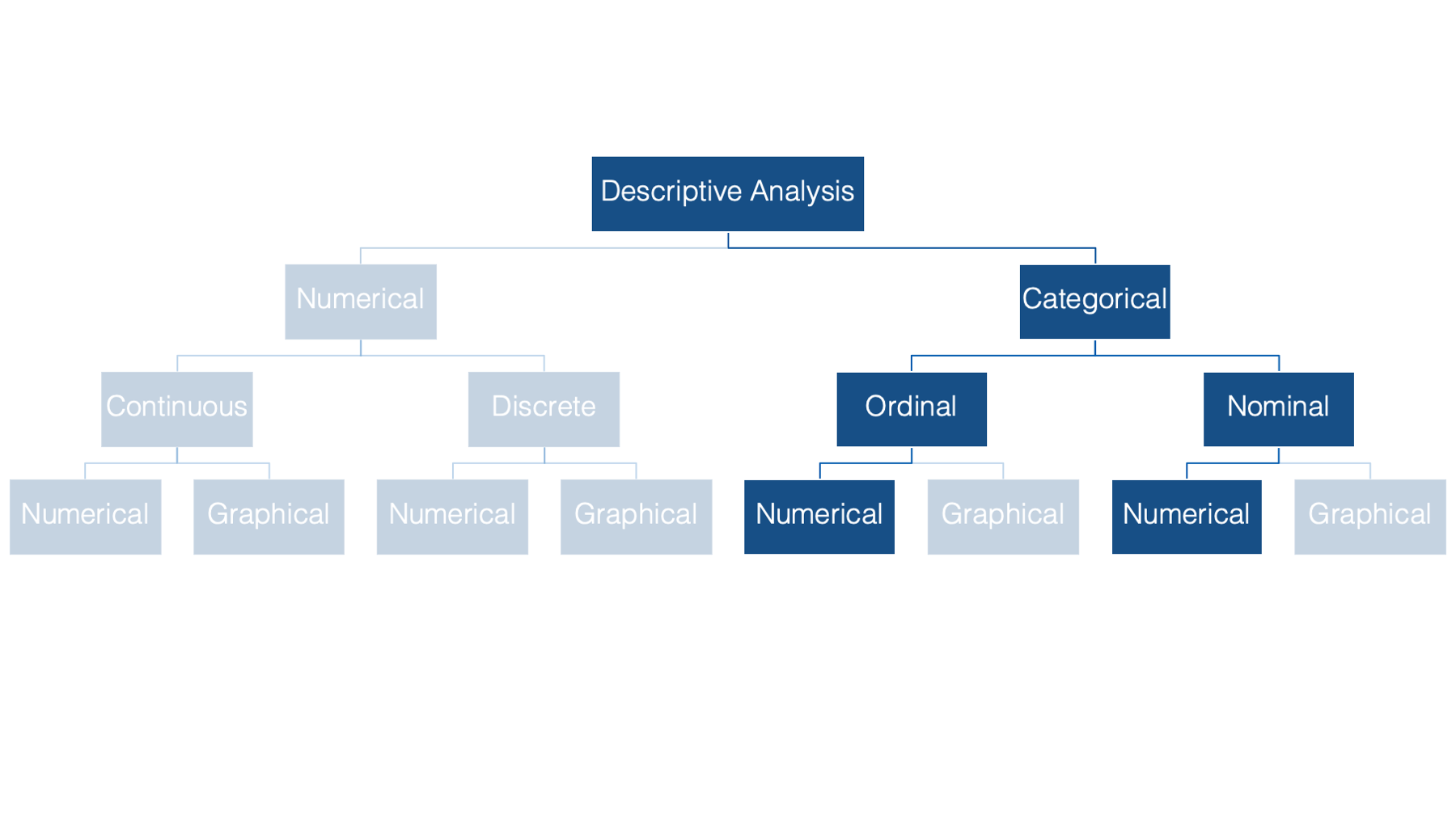 Some examples of categorical variables commonly seen in public health data are: sex, race or ethnicity, and level of educational attainment. 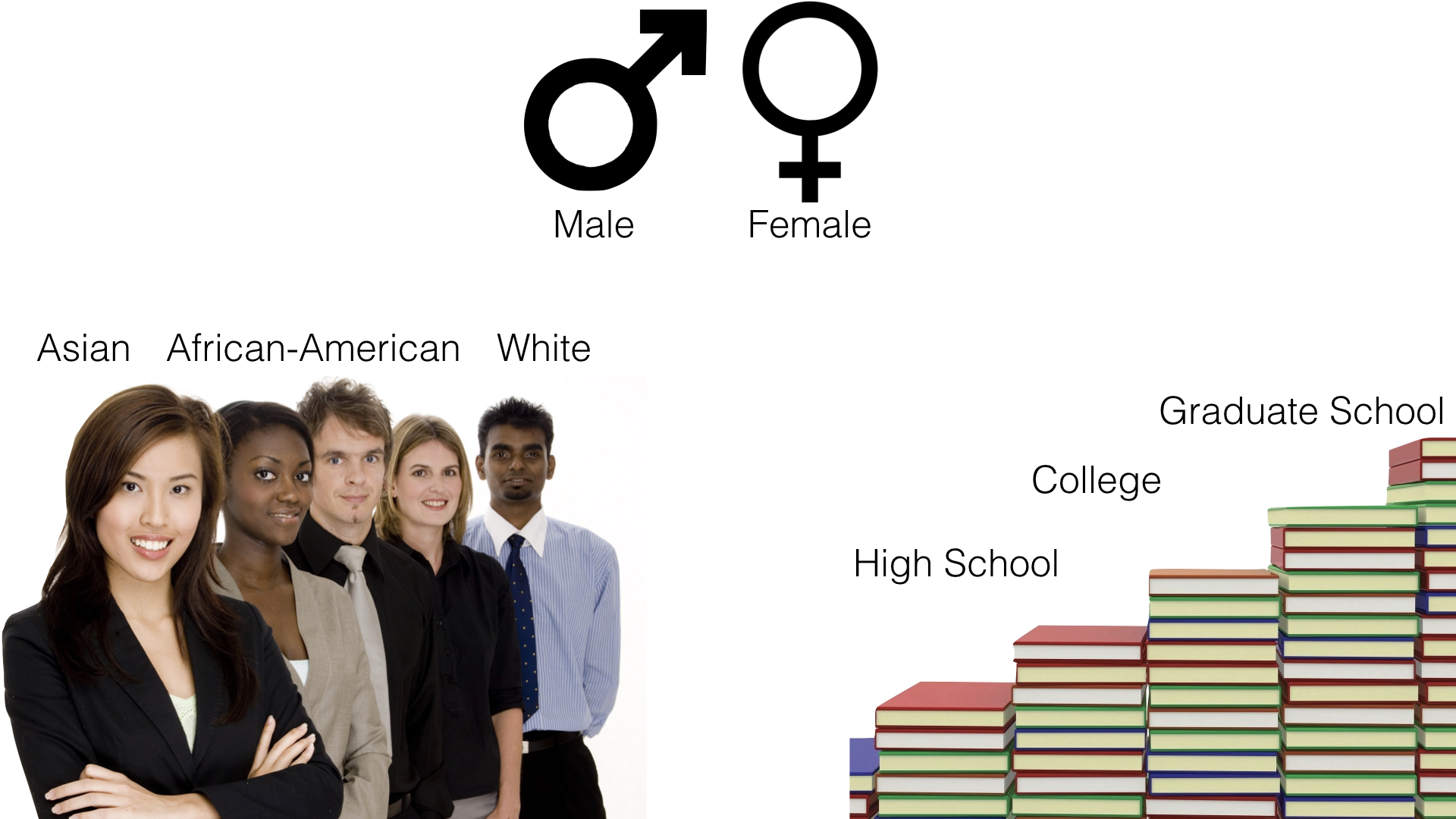 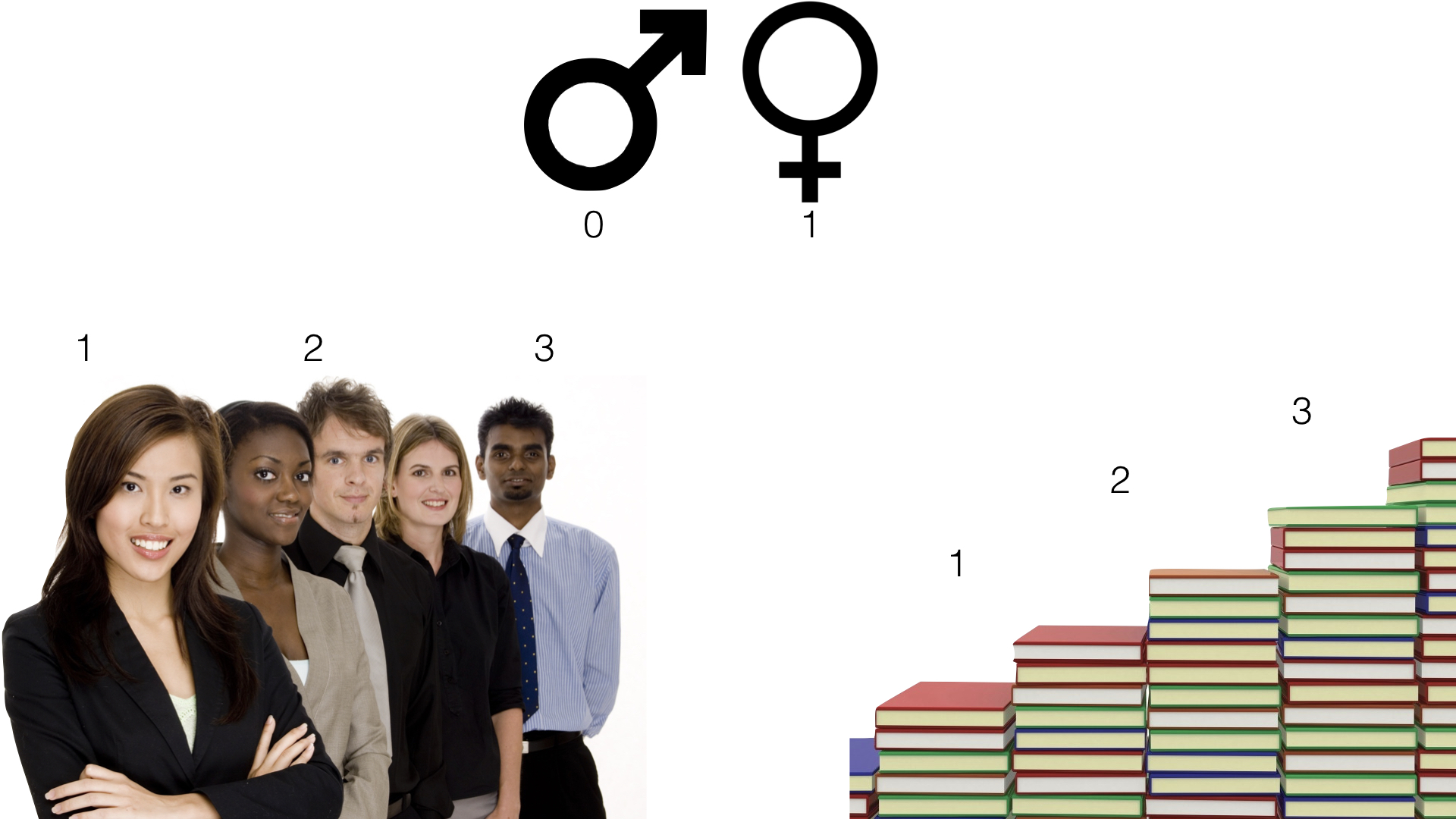 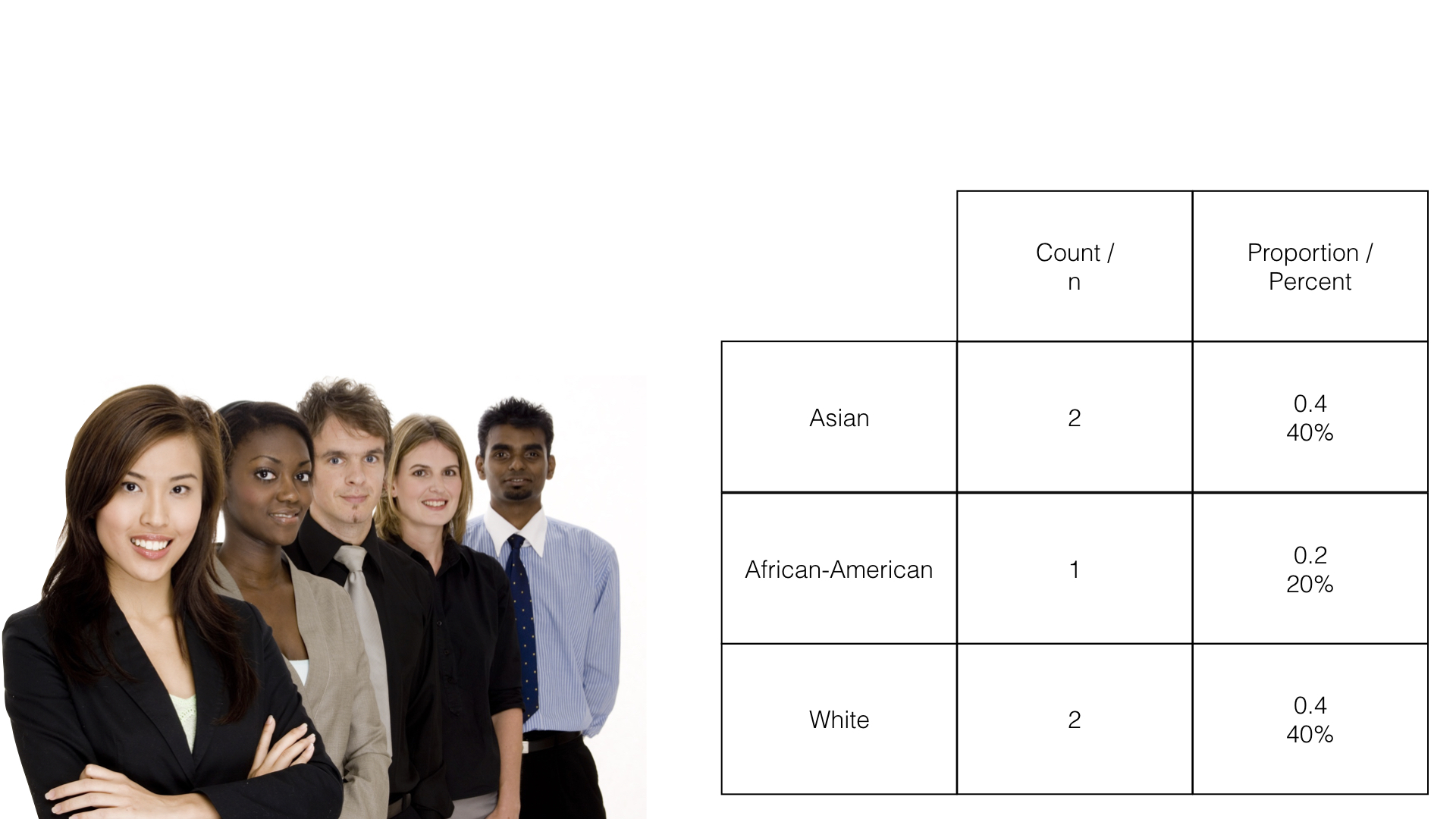 The count is simply the number of observations, in this case people, which fall into each possible category.

The proportion is just the count divided by the total number of observations. In this example, 2 people out of 5 people (.40 or 40%) are in the Asian race category.

The remainder of this chapter is devoted to learning how to calculate frequency counts and percentages using R.

Before moving on to calculating frequency counts and percentages, I want to introduce a new vector type – the factor vector type. In R, factors can be useful for representing categorical data. To demonstrate, let’s simulate a simple little data frame.

Each participant in our data frame has a value for edu – 1, 2, 3, or 4. The value they have for that variable corresponds to the highest level of formal education they have completed, which is split up into categories that we defined. We can see which category each person is in by viewing the data.

We can see that person 001 is in category 3, person 002 is in category 1, and so on. This compact representation of the categories is convenient for data entry and data manipulation, but it also has an obvious limitation – what do these numbers mean? I defined what these values mean for you above, but if you didn’t have that information, or some kind of prior knowledge about the process that was used to gather this data, then you would likely have no idea what these numbers mean.

Now, we could have solved that problem by making education a character vector from the beginning. For example:

But, this strategy also has a few limitations.

👎 First, entering data this way requires more typing. Not such a big deal in this case because we only have 4 participants. But, imagine typing out the categories as character strings 10, 20, or 100 times. 😫

👎 Second, R summarizes character vectors alphabetically by default, which may not be the ideal way to order some categorical variables.

👎 Third, creating categorical variables in our data frame as character vectors limits us to inputting only observed values for that variable. However, there are cases when other categories are possible and just didn’t apply to anyone in our data. That information may be useful to know.

At this point, I’m going to show you how to coerce a variable to a factor in your data frame. Then, I will return to showing you how using factors can overcome some of the limitations outlined above.

The code below shows one method for coercing a numeric vector into a factor.

When we printed the data frame above, the values in edu_f looked the same as the character strings displayed in edu_char. Notice, however, that the variable type displayed below edu_char in the data frame above is <chr> for character. Alternatively, the variable type displayed below edu_f is <fctr>. Although, labels are used to make factors look like character vectors, they are still integer vectors under the hood. For example:

There are two main reasons that you may want to use factors instead of character vectors at times:

👍 Second, creating categorical variables in our data frame as character vectors limits us to inputting only observed values for that variable. However, there are cases when other categories are possible and just didn’t apply to anyone in our data. That information may be useful to know. Factors allow us to tell R that other values are possible, even when they are unobserved in our data. For example, let’s add a fifth possible category to our education variable – graduate school.

Notice that R now tells us that the value Graduate school was possible but was observed zero times in the data.

It is also possible to coerce character vectors to factors. For example, we can coerce edu_char to a factor like so:

Now that we know how to use factors, let’s return to our discussion of describing categorical variables.

Below, we’re going to learn to do descriptive analysis in R by experimenting with some simulated data that contains several people’s sex, height, and weight. You can follow along with this lesson by copying and pasting the code chunks below in your R session.

Now that we’re able to easily view our data, let’s return to the original purpose of this demonstration – calculating frequencies and proportions. At this point, I suspect that few of you would have any trouble telling me that the frequency of females in this data is 12 and the frequency of males in this data is 8. It’s pretty easy to just count the number of females and males in this small data set with only 20 rows. Further, if I asked you what proportion of this sample is female, most of you would still be able to easily tell me 12/20 = 0.6, or 60%. But, what if we had 100 observations or 1,000,000 observations? You’d get sick of counting pretty quickly. Fortunately, you don’t have to! Let R do it for you! As is almost always the case with R, there are multiple ways we can calculate the statistics that we’re interested in.

As we already saw above, we can use the base R table() function like this:

Additionally, we can use the CrossTable() function from the gmodels package, which gives us a little more information by default.

The final way I’m going to discuss here is the tidyverse way, which is my preference. We will have to write a little additional code, but the end result will be more flexible, more readable, and will return our statistics to us in a data frame that we can save and use for further analysis. Let’s walk through this step by step…

🗒Side Note: You should already be familiar with the pipe operator (%>%), but if it doesn’t look familiar to you, you can learn more about it in Using pipes. Don’t forget, if you are using RStudio, you can use the keyboard shortcut shift + command + m (Mac) or shift + control + m (Windows) to insert the pipe operator.

First, we don’t want to view the individual values in our data frame. Instead, we want to condense those values into summary statistics. This is a job for the summarise() function.

As you can see, summarise() doesn’t do anything interesting on its own. We need to tell it what kind of summary information we want. We can use the n() function to count rows. By default, it will count all the rows in the data frame. For example:

And, that’s what we want.

🗒Side Note: dplyr’s group_by() function operationalizes the Split - Apply - Combine strategy for data analysis. That sounds sort of fancy, but all it really means is that we split our data frame up into smaller data frames, apply our calculation separately to each smaller data frame, and then combine those individual results back together as a single result. So, in the example above, the height_and_weight_20 data frame was split into two separate little data frames (i.e., one for females and one for males), then the summarise() and n() functions counted the number of rows in each of the two smaller data frames (i.e., 12 and 8 respectively), and finally combined those individual results into a single data frame, which was printed to the screen for us to view.

However, it will be awkward to work with a variable named n() (i.e., with parentheses) in the future. Let’s go ahead and assign it a different name. We can assign it any valid name we want. Some names that might make sense are n, frequency, or count. I’m going to go ahead and just name it n without the parentheses.

Finally, estimating categorical frequencies like this is such a common operation that dplyr has a shortcut for it – count(). We can use the count() function to get the same result that we got above.

In addition to frequencies, we will often be interested in calculating percentages for categorical variables. As always, there are many ways to accomplish this task in R. From here on out, I’m going to primarily use tidyverse functions.

This works, but it would be better to have R calculate the total number of observations for the denominator (20) than for us to manually type it in. In this case, we can do that with the sum() function.

Finally, we just need to multiply our proportion by 100 to convert it to a percentage.

In the real world, you will frequently encounter data that has missing values. Let’s quickly take a look at an example by adding some missing values to our data frame.

Now let’s see how our code from above handles this

As you can see, we are now treating missing as if it were a category of sex_f. Sometimes this will be the result you want. However, often you will want the n and percent of non-missing values for your categorical variable. This is sometimes referred to as a complete case analysis. There’s a couple of different ways we can handle this. I will simply filter out rows with a missing value for sex_f with dplyr’s filter() function.

Notice that now our percentages are being displayed with 5 digits to the right of the decimal. If we wanted to present our findings somewhere (e.g., a journal article or a report for our employer) we would almost never want to display this many digits. Let’s get R to round these numbers for us.

In the sections above, we learned how to use dplyr functions to calculate the frequency and percentage of observations that take on each value of a categorical variable. However, there can be a fair amount of code writing involved when using those methods. The more we have to repeatedly type code, the more tedious and error-prone it becomes. This is an idea we will return to many times in this book. Luckily, the R programming language allows us to write our own functions, which solves both of those problems.

Later in this book, I will show you how to write your own functions. For the time being, I’m going to suggest that you install and use a package I created called freqtables. The freqtables package is basically an enhanced version of the code we wrote in the sections above. I designed it to help us quickly make tables of descriptive statistics (i.e., counts, percentages, confidence intervals) for categorical variables, and it’s specifically designed to work in a dplyr pipeline.

Like all packages, you need to first install it…

And then load it…

Now, let’s use the freq_table() function from freqtables package to rerun our analysis from above.

We will continue using the freqtables package at various points throughout the book. I will also show you some other cool things we can do with freqtables. For now, all you need to know how to do is use the freq_table() function to calculate frequencies and percentages for single categorical variables.

🏆 Congratulations! You now know how to use R to do some basic descriptive analysis of individual categorical variables.