In the chapter on measures of central tendency, we found the minimum value, mean value, median value, mode value, and maximum value of the weight variable in our hypothetical sample of students. We’ll go ahead start this lesson by rerunning that analysis below, but this time we will analyze heights instead of weights.

🗒Side Note: To get both mode height values to display in the output above I used the paste() function with the collapse argument set to ” , ” (notices the spaces). This forces R to display our mode values as a character string. The downside is that the “mode_height” variable no longer has any numeric value to R – it’s simply a character string. However, this isn’t a problem for us. We won’t be using the mode in this lesson – and it is rarely used in practice.

Keep in mind that our interest is in describing the “typical” or “average” person in our sample. The result of our analysis above tells us that the average person who answered the height question in our hypothetical class was: 68.4 inches. This information gets us reasonably close to understanding the typical height of the students in our hypothetical class. But remember, our average person does not necessarily have the same height as any actual person in our class. So a natural extension of our original question is: “how much like the average person, are the other people in class.”

For example, is everyone in class 68.4 inches? 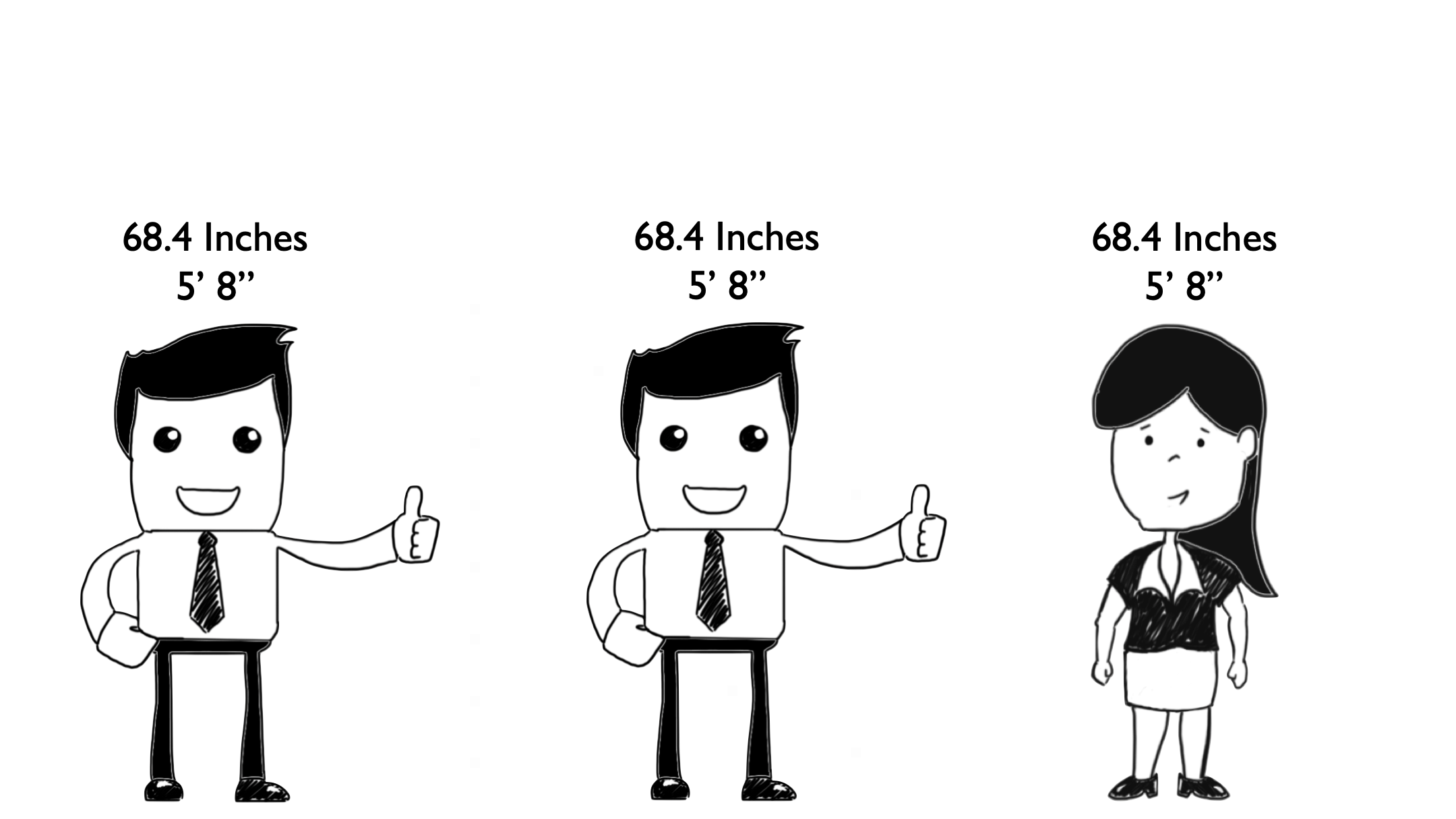 Or are there differences in everyone’s height, with the average person’s height always having a value in the middle of everyone else’s? 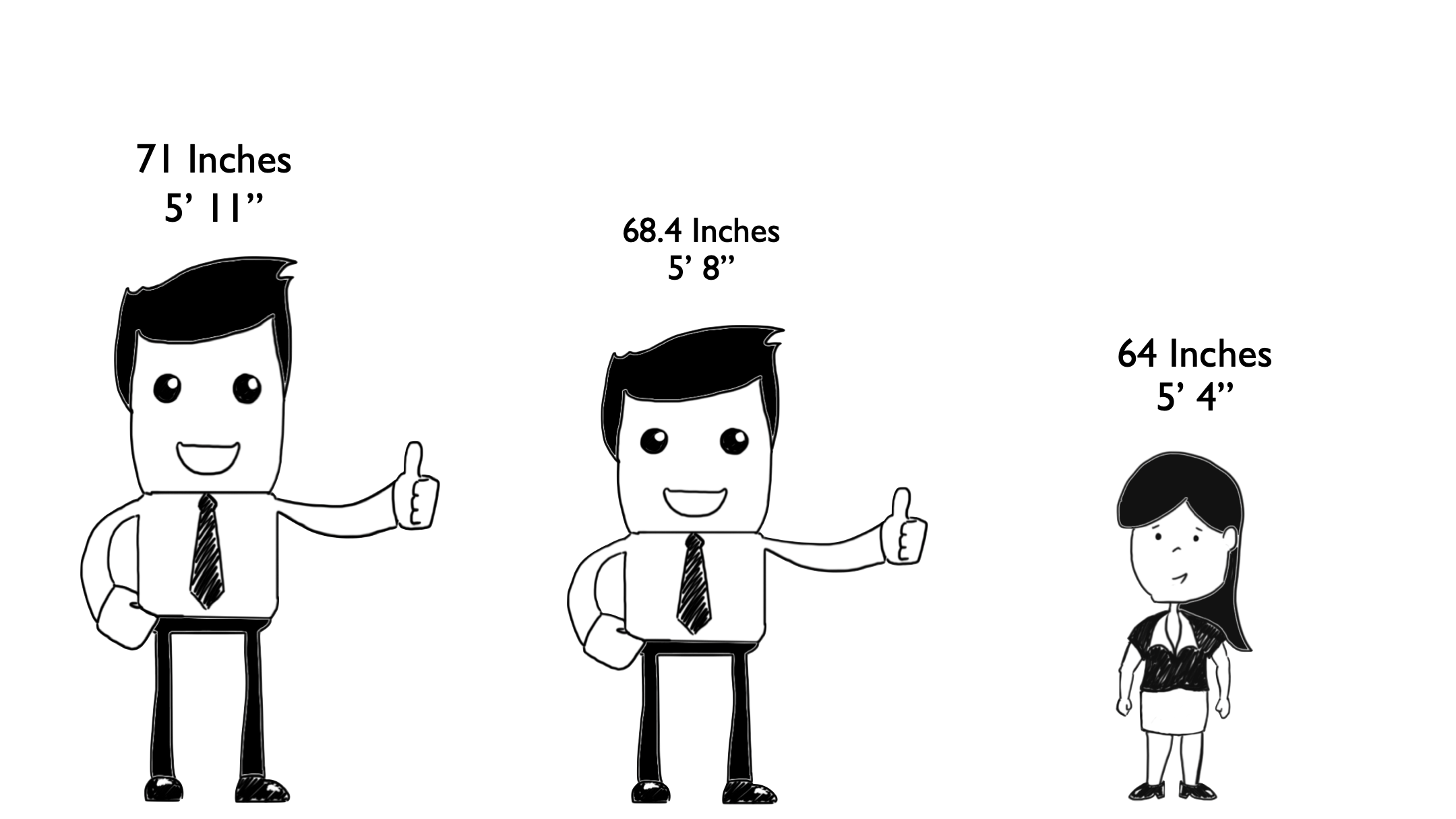 The measures used to answer this question are called measures of dispersion, which we can say is the amount of difference between people in the class, or more generally, the amount of variability in the data.

Three common measures of dispersion used are the: 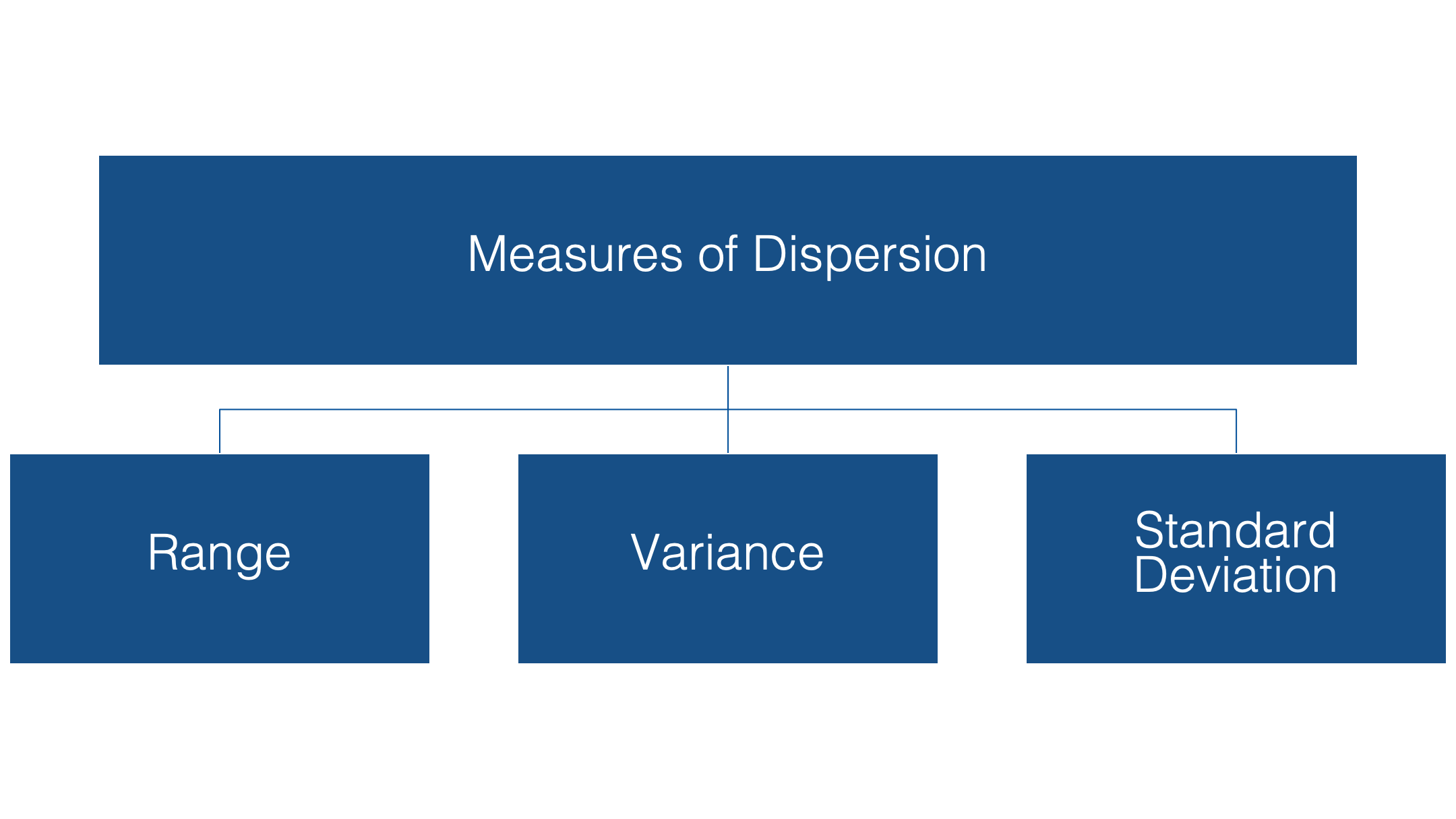 The range is simply the difference between the maximum and minimum value in the data.

In other words, are most people in the class out at the edges of the range of values in the data? 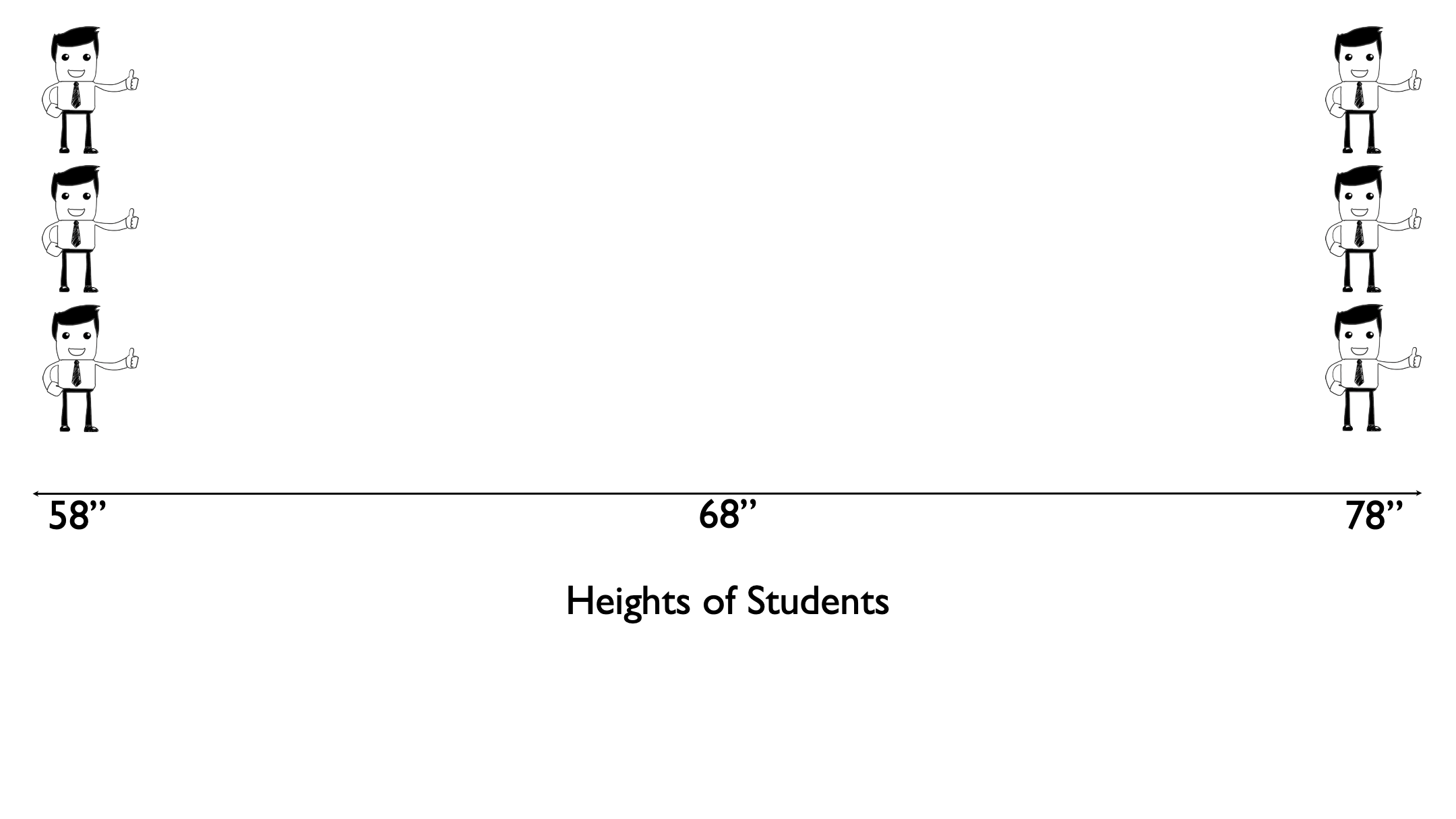 Or are people “evenly distributed” across the range of heights for the class? 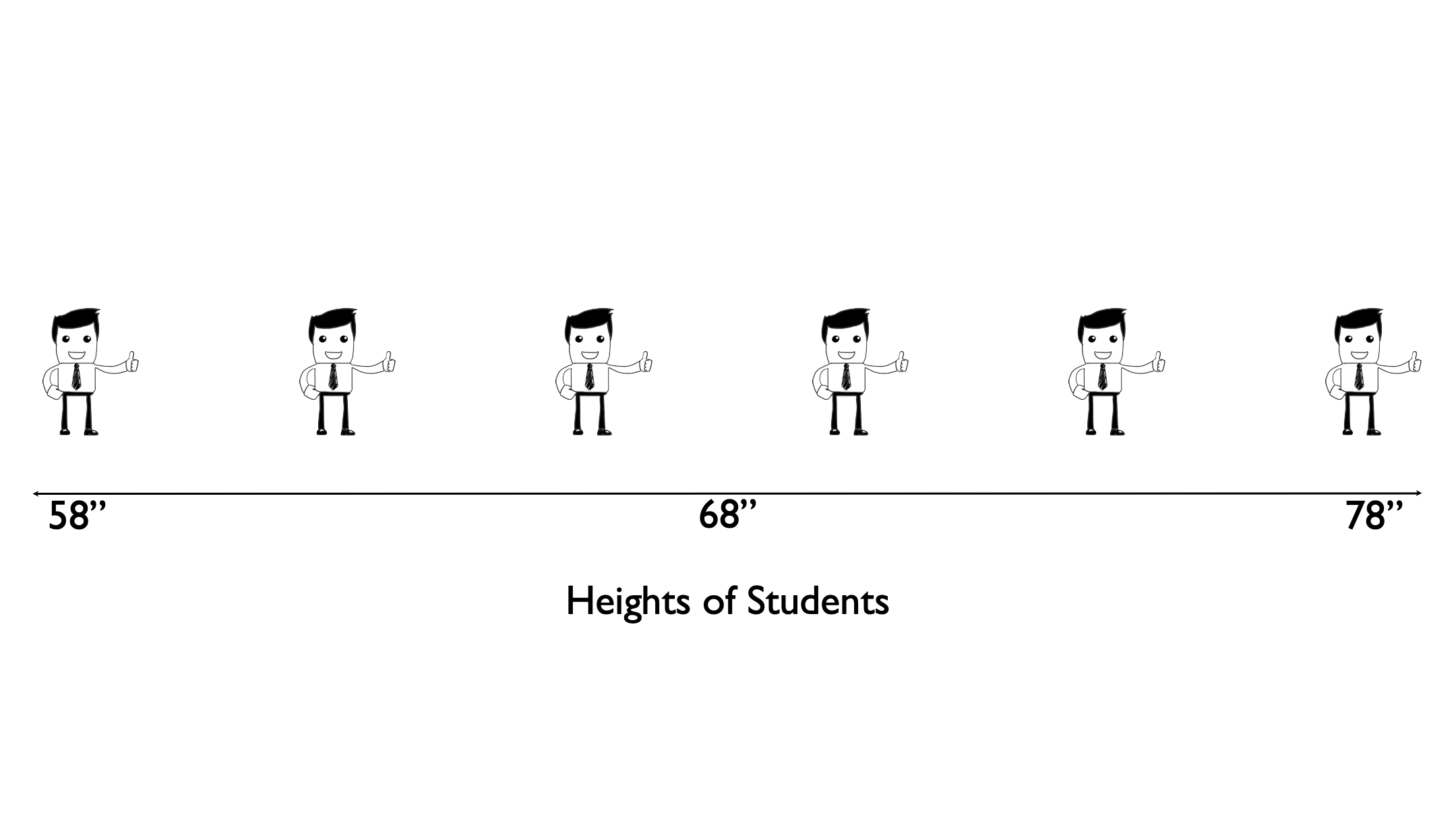 Or something else entirely?

The variance is a measure of dispersion that is slightly more complicated to calculate, although not much, but gives us a number we can use to quantify the dispersion of heights around the mean. To do this, let’s work through a simple example that only includes six observations: 3 people who are 58 inches tall and 3 people who are 78 inches tall. In this sample of six people from our population the average height is 68 inches.

Next, let’s draw an imaginary line straight up from the mean. 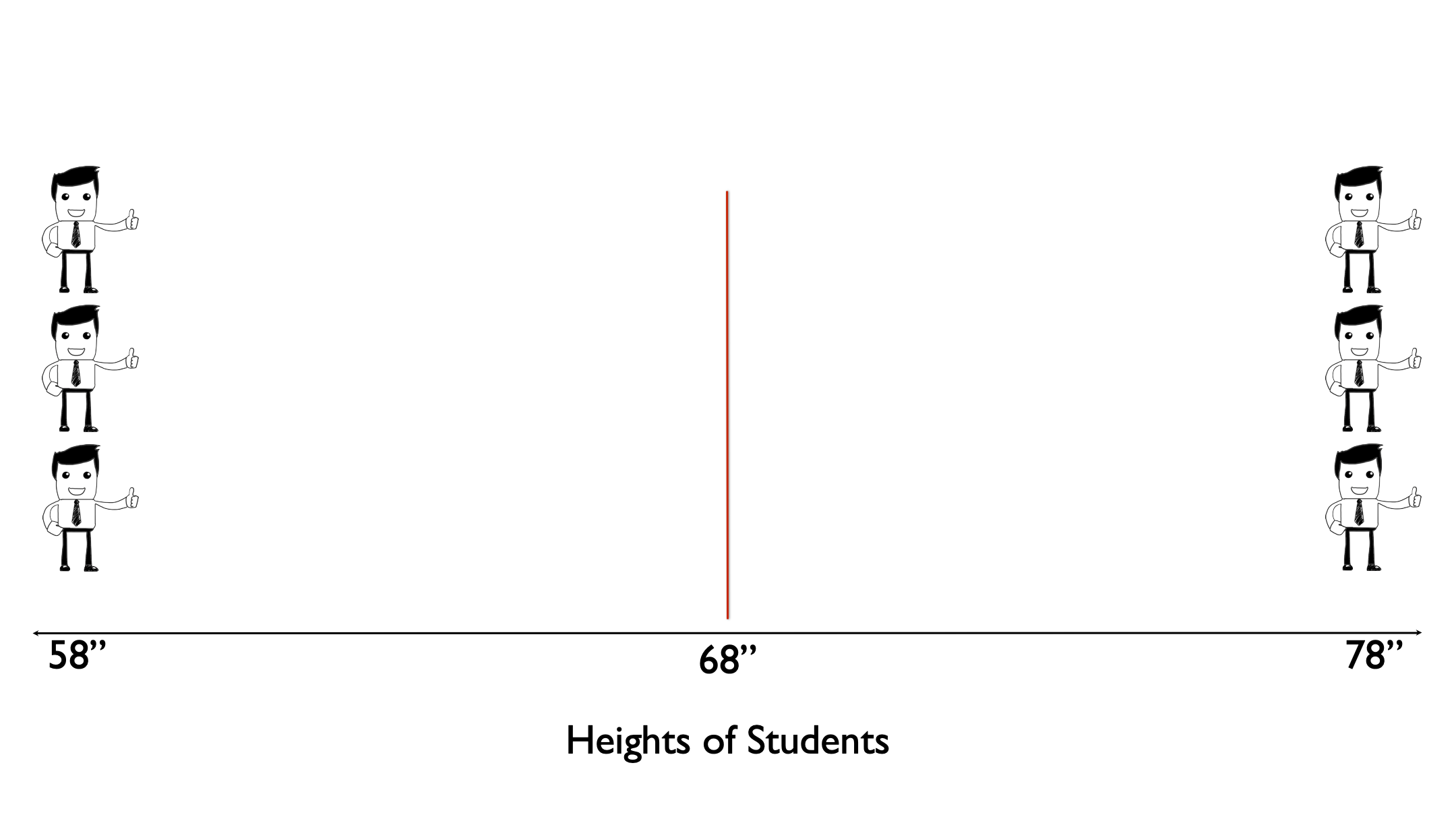 Then, let’s measure the difference, or distance, between each person’s height and the mean height. 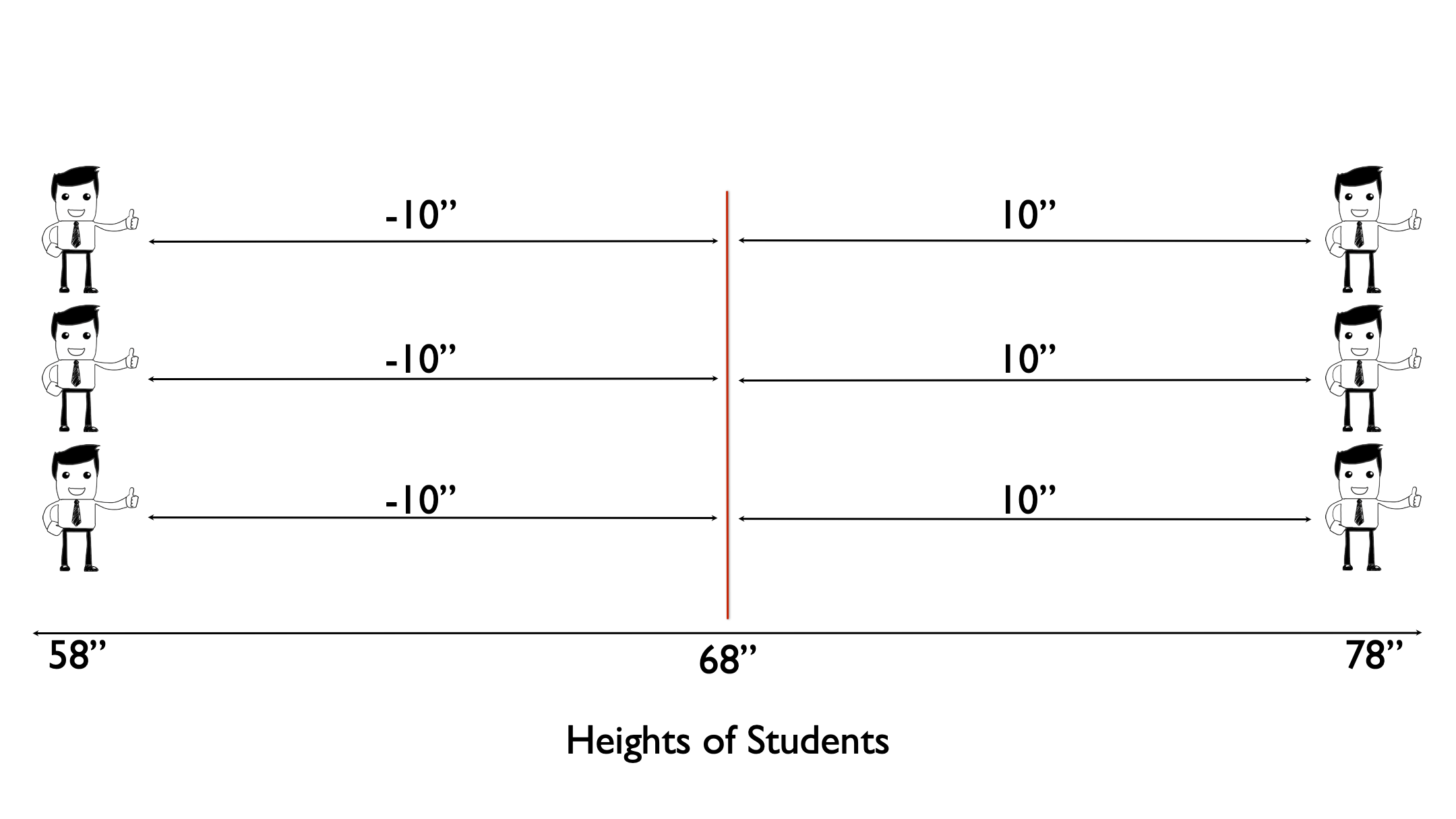 Then we square the differences. 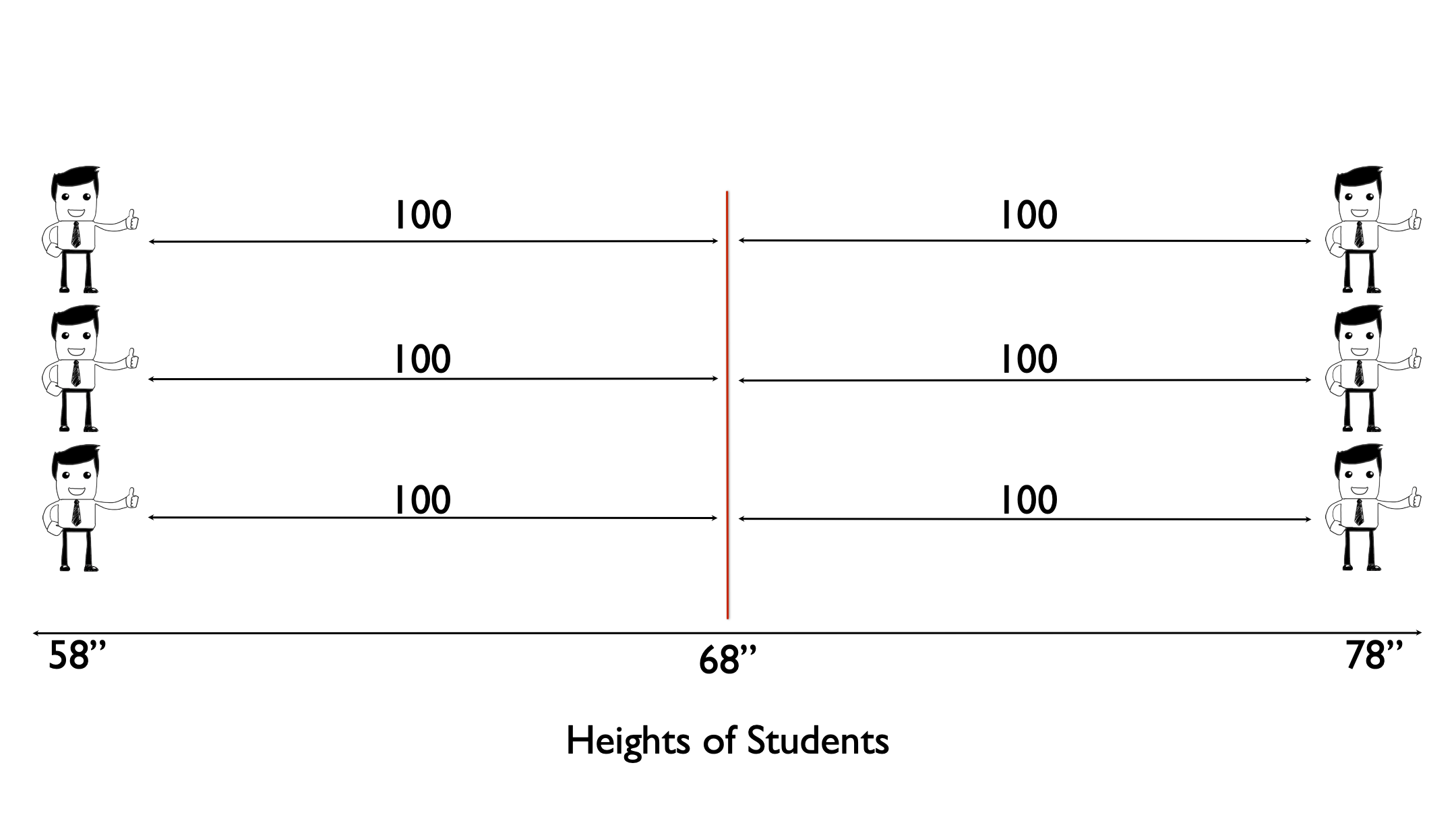 Then we add up all the squared differences. 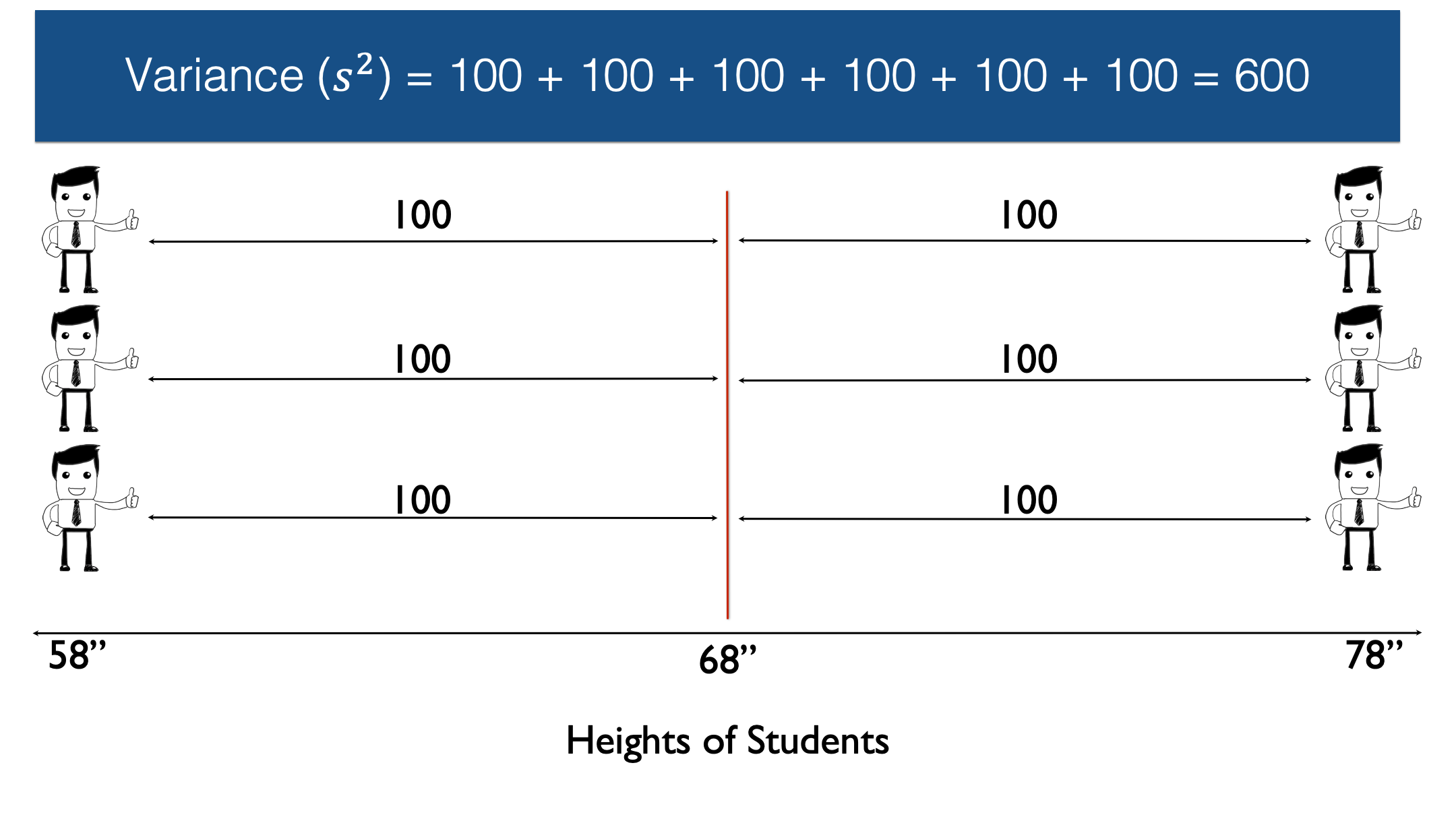 And finally, we divide by n, the number of non-missing observations, minus 1. In this case n equals six, so n-1 equals five. 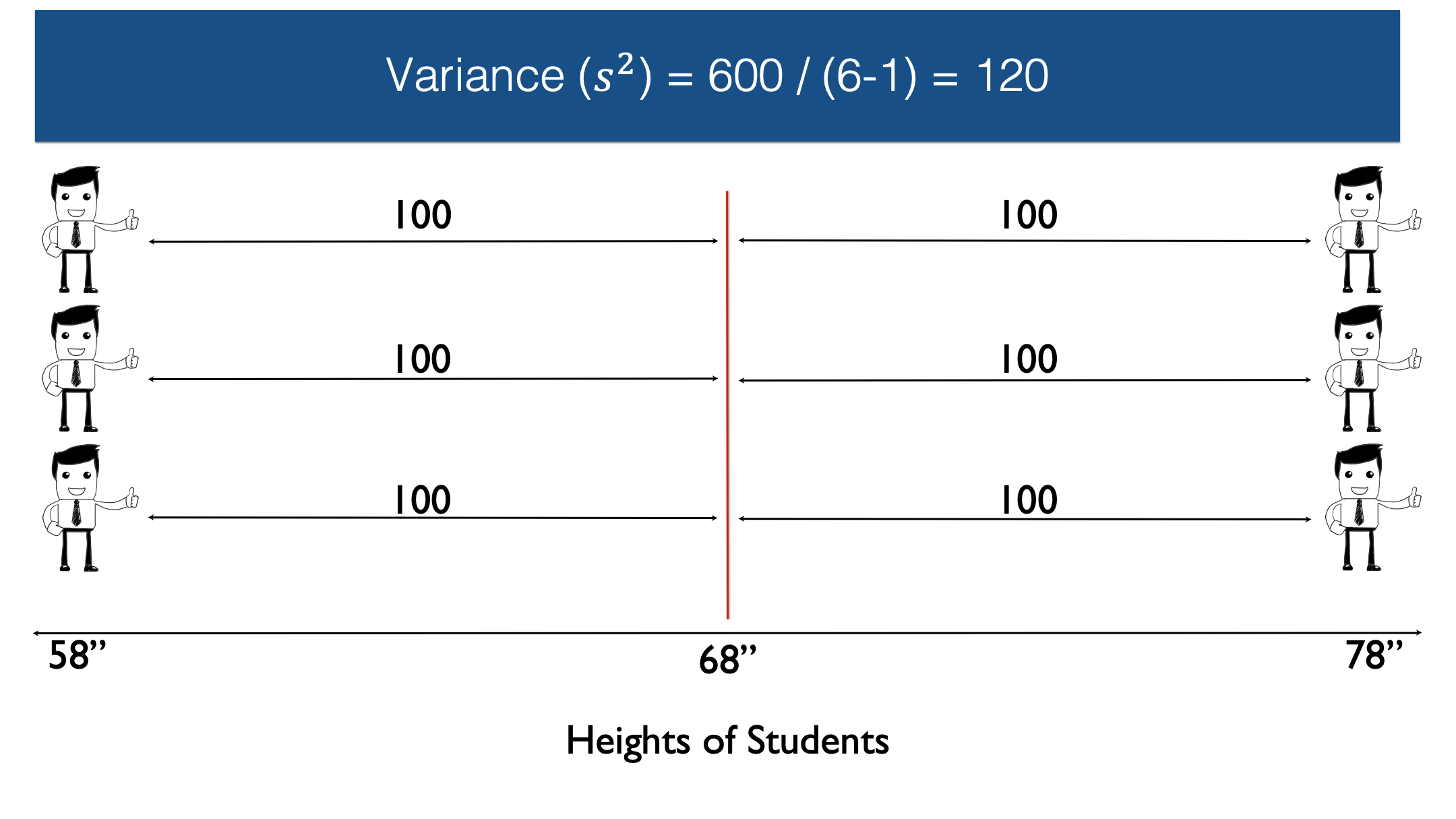 🗒Side Note: The sample variance is often written as \(s^2\).

🗒Side Note: If the 6 observations here represented our entire population of interest, then we could simply divide by n instead of n-1.

Getting R to do this math for us is really straightforward. We simply use base R’s var() function.

So, 600 divided by 5 equals 120. Therefore, the sample variance in this case is 120. However, because the variance is expressed in squared units, instead of the original units, it isn’t necessarily intuitive to interpret.

If we take the square root of the variance, we get the standard deviation. 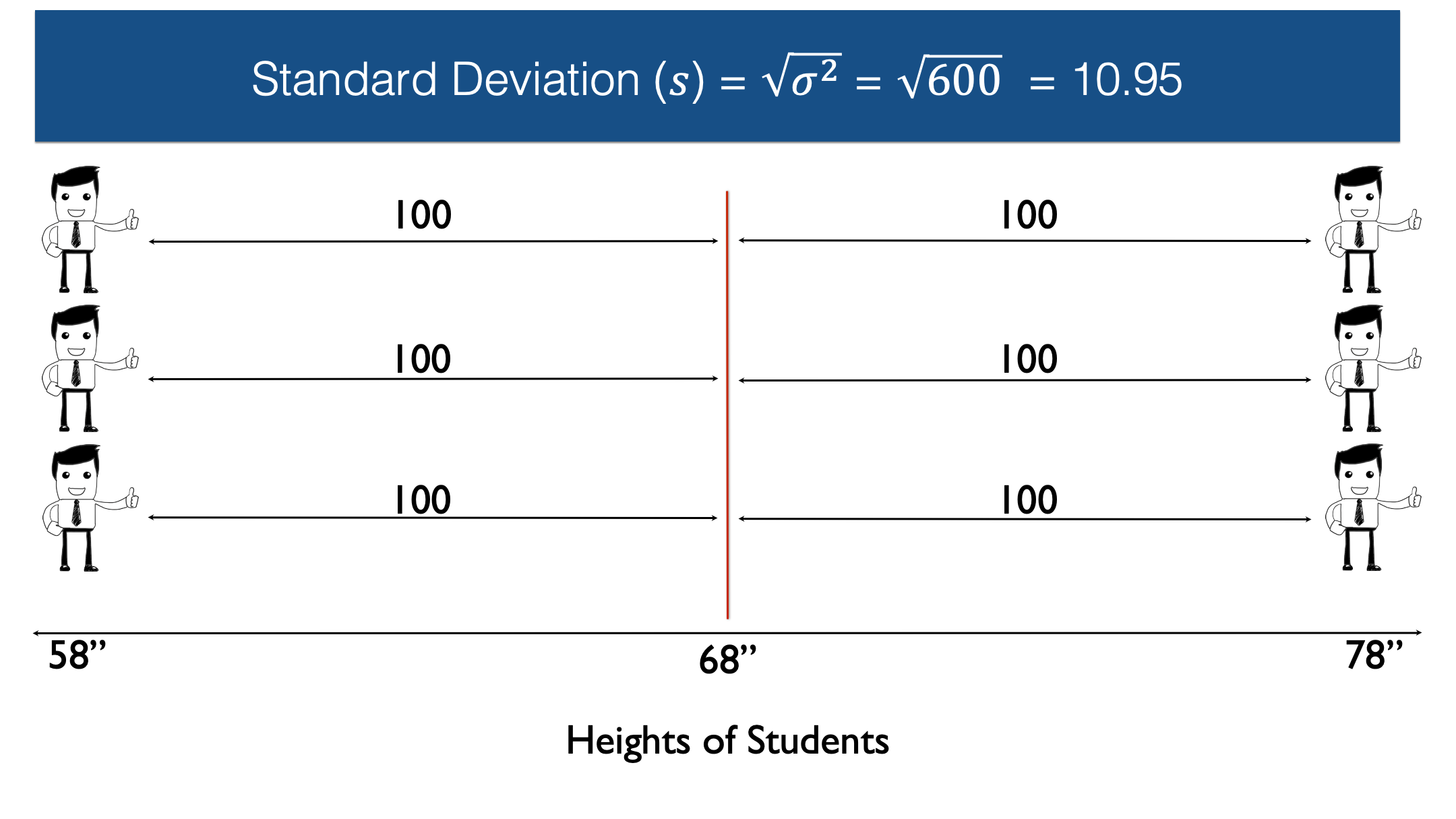 🗒Side Note: The sample standard deviation is often written as \(s\). 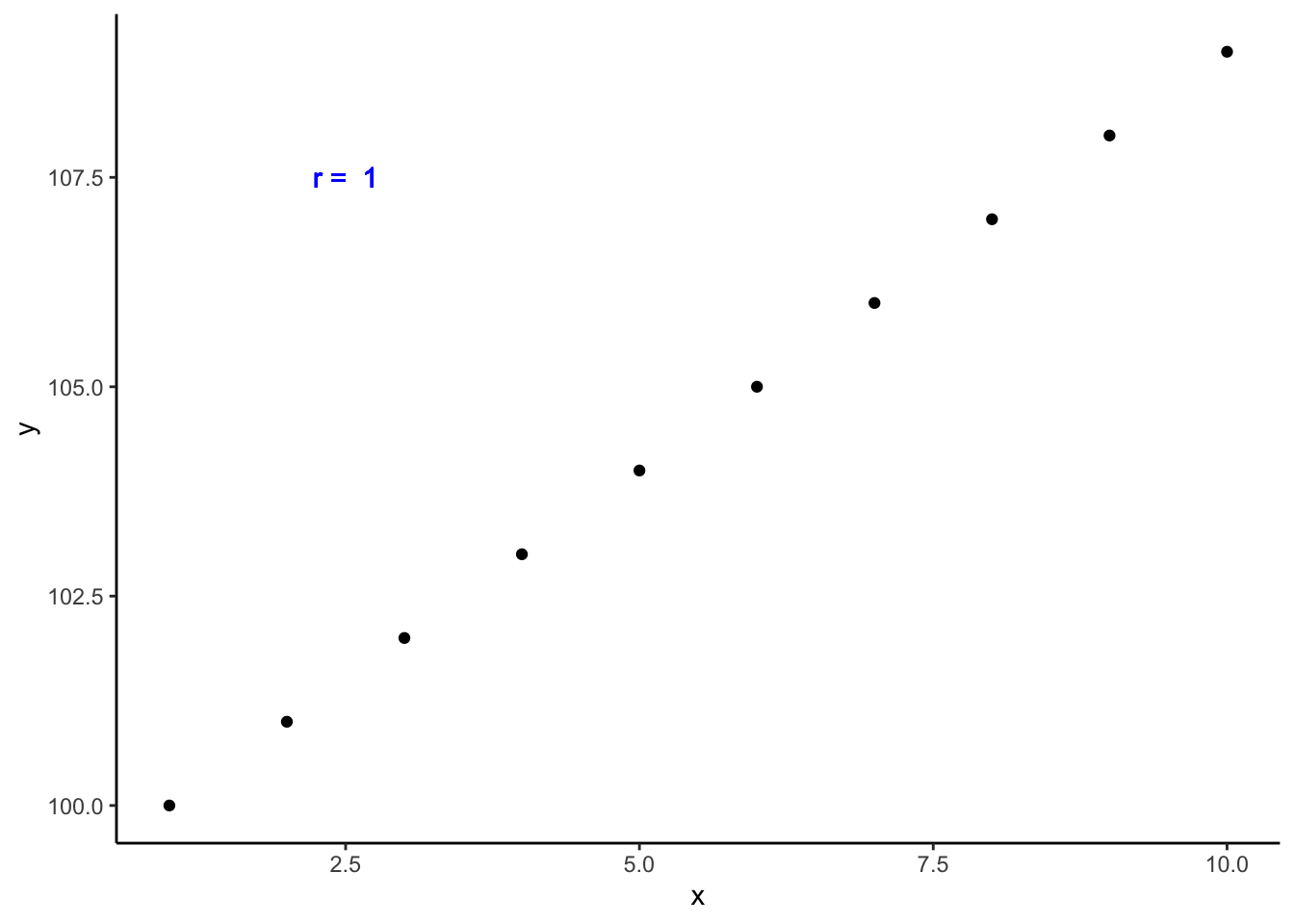 Unfortunately, the current data is nowhere near normally distributed and does not make for a good example of this rule.

Now that you understand what the different measures of distribution are and how they are calculated, let’s further develop your “feel” for interpreting them. I like to do this by comparing different simulated distributions.

I can use this simulated data to quickly demonstrate a couple of these concepts for you. Let’s use R to calculate and compare the mean, variance, and standard deviation of each variable.

So, for all the columns the mean is 68 inches. And that makes sense, right? We set the middle value and/or most commonly occurring value to be 68 inches for each of these variables. However, the variance and standard deviation are quite different.

For the column “all_68” the variance and standard deviation are both zero. If you think about it, this should make perfect sense: all the values are 68 – they don’t vary – and each observations distance from the mean (68) is zero.

When comparing the rest of the columns notice that all of them have a non-zero variance. This is because not all people have the same value in that column – they vary. Additionally, we can see very clearly that variance (and standard deviation) are affected by at least two things:

In summary, although the variance and standard deviation don’t always have a really intuitive meaning all by themselves, we can get some useful information by comparing them. Generally speaking, the variance is larger when values are clustered at very low or very high values away from the mean, or when values are spread across a wider range.