In the chapter on R Scripts, you learned how to create R scripts – plain text files that contain R code and comments. These R scripts are kind of a big deal because they give us a simple and effective tool for saving, modifying, and sharing our R code. If it weren’t for the existence of R markdown files, we would probably do all of the coding in this book using R scripts. However, R markdown files do exist and they are AWESOME! So, I’m actually going to suggest that you use them instead of R scripts the majority of the time.

It’s actually kind of difficult for me to describe what an R markdown file is if you’ve never seen or heard of one before. Therefore, I’m going to start with an example and work backwards from there. Figure 8.1 below is an R markdown file. It includes the exact same R code and comments as the example we saw in the chapter on creating R scripts. 7.3 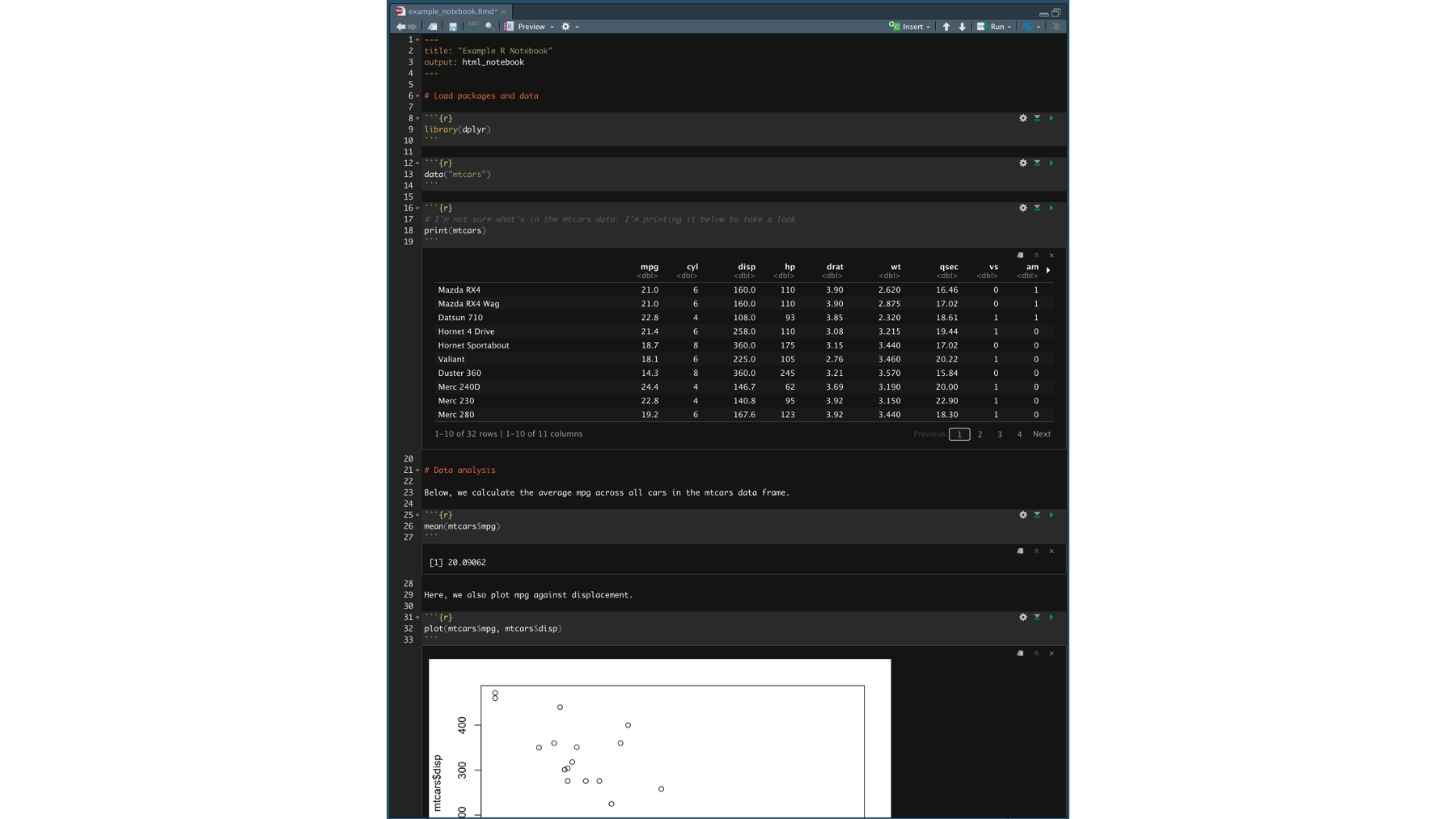 Notice that the results are embedded directly in the R markdown file immediately below the R code (e.g., between lines 19 and 20)!

Once rendered, this R markdown file creates the HTML file you see below in figure 8.2. HTML files are what websites are made out of, and I’ll walk you through how to create them from R markdown files later in this chapter. 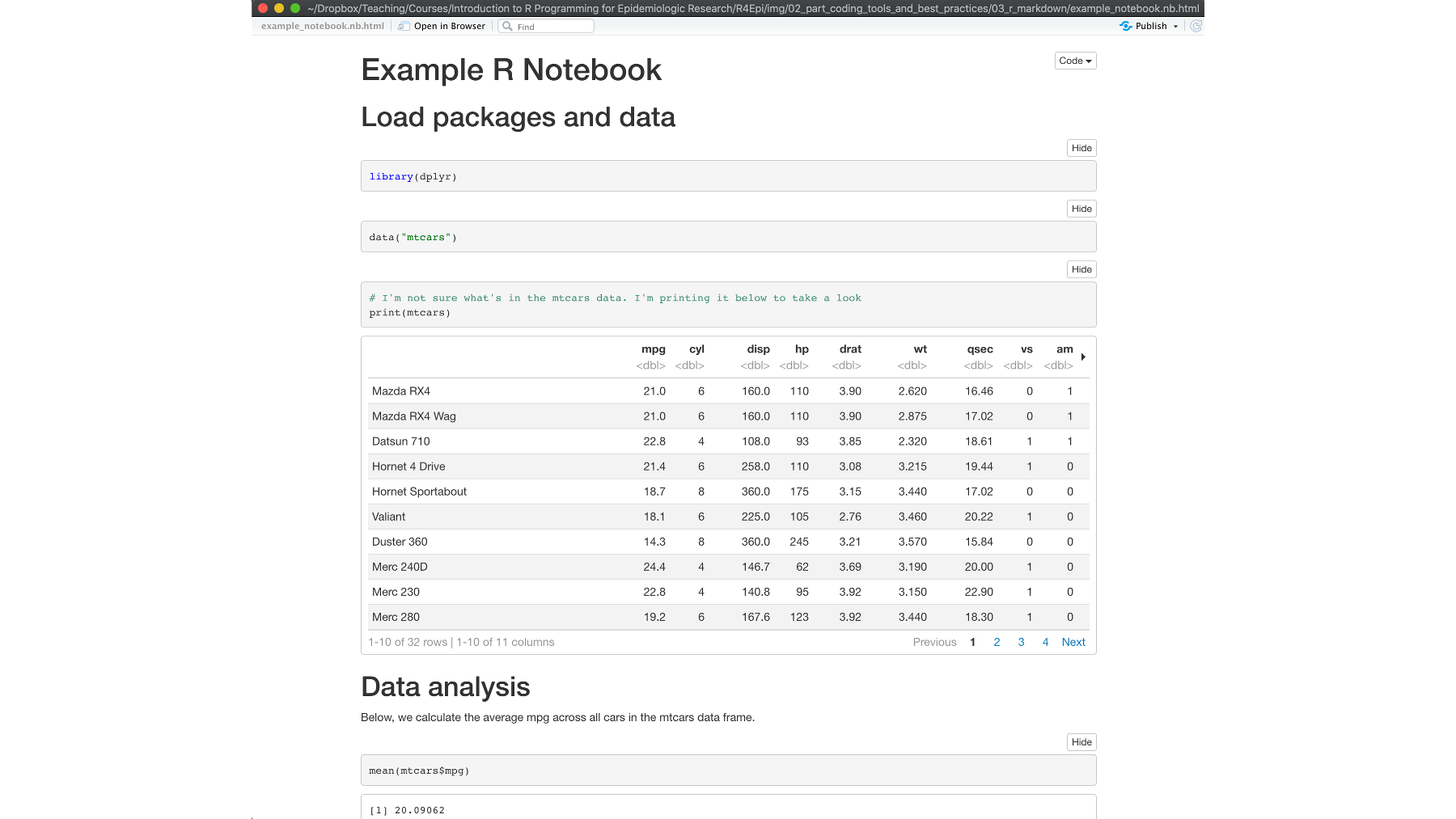 Notice how everything is nicely formatted and easy to read!

When you create R markdown files on your computer, the rendered HTML file is saved in the same folder by default. 8.3 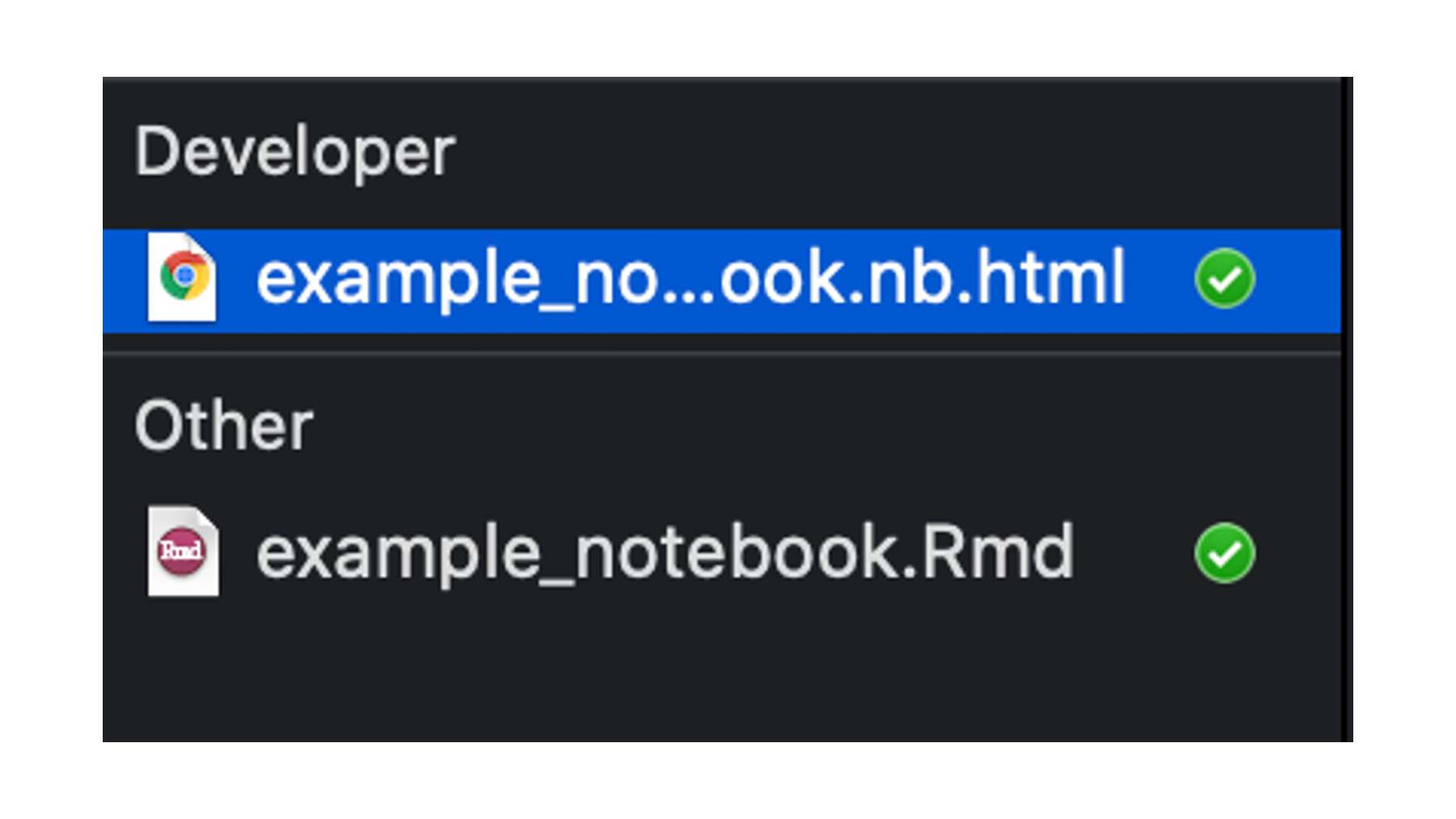 There is literally an entire book about R markdown (and it’s worth reading at some point). Therefore, I’m only going to hit some of the highlights in this chapter. As a starting point, you can think of R markdown files as being a mix of R scripts, the R console, and a Microsoft Word or Google Doc document. I say this because:

Even when I don’t share my R markdown files with anyone else, I find that the added functionality described above really helps me organize my data analysis more effectively, and helps me understand what I was doing if I come back to the analysis at some point in the future.

But, R markdown really shines when I do want to share my analysis or results with others. To get an idea of what I’m talking about, please take a look at the R markdown gallery and view some of the amazing things you can do with R markdown. As you can see, these R markdown files mix R code with other kinds of text and images to create documents, websites, presentations, and more.

At this point, you may be thinking “Ok, that R markdown gallery has some cool stuff, but this also looks complicated. Why shouldn’t I just use a basic R script for the little R program I’m writing?” If that’s what you’re thinking, you have a valid point. R markdown files are slightly more complicated than basic R scripts. However, after reading in the sections below, I think you will find that getting started with R markdown doesn’t have to be super complicated, and the benefits provided make the initial investment in learning R markdown worth your time.

RStudio makes it very easy to create your own R markdown file, of which there are several types. In this chapter, I’m going to show you how to create a really commonly used type of R markdown file called an R Notebook.

The process is actually really similar to the process we used to create an R script. Start by clicking on the icon shown below. 8.4 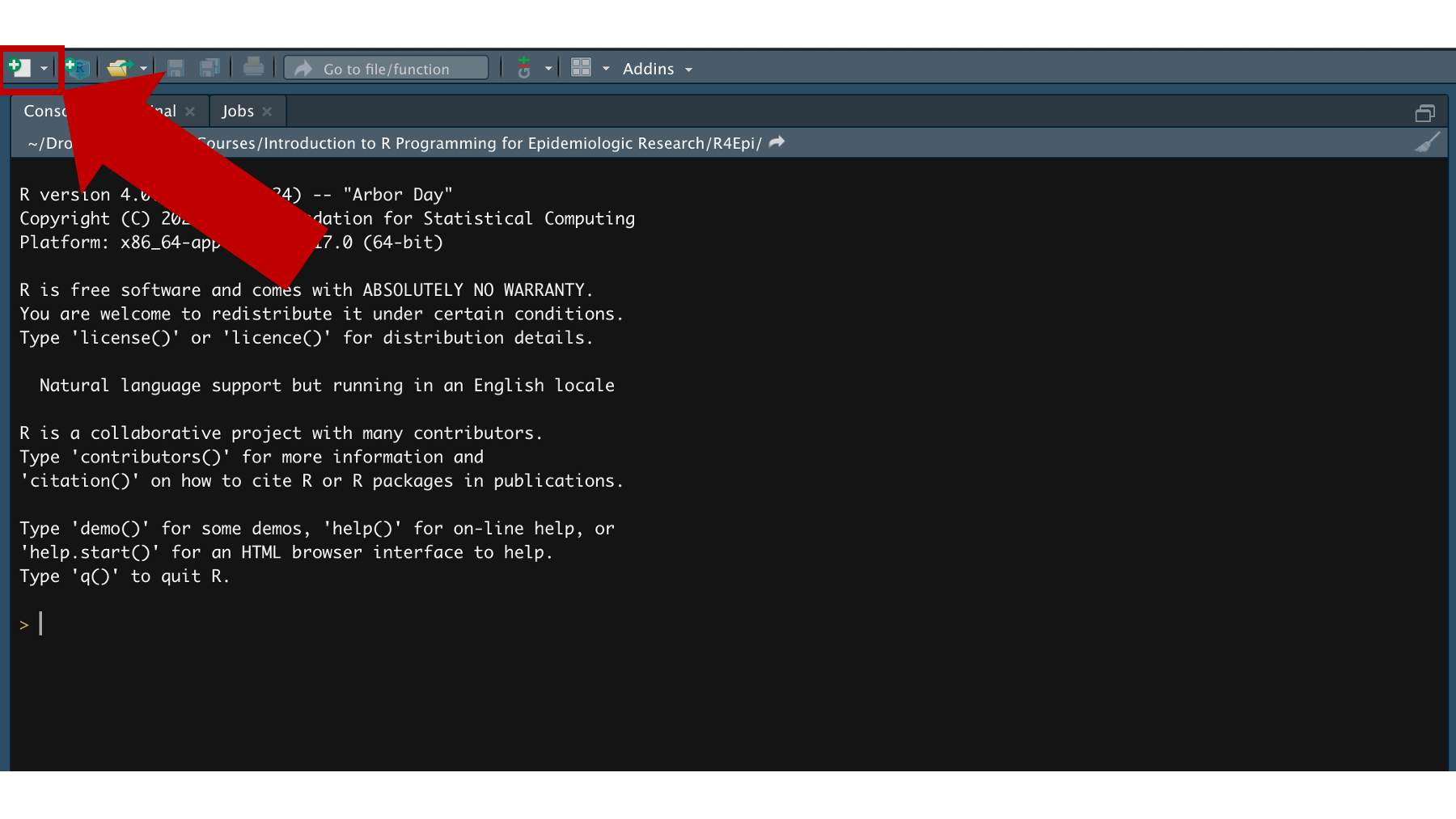 As before, you’ll be presented with a dropdown box that lists a bunch of different file types that you can create. This time, we’ll click R Notebook instead of R script. 8.5 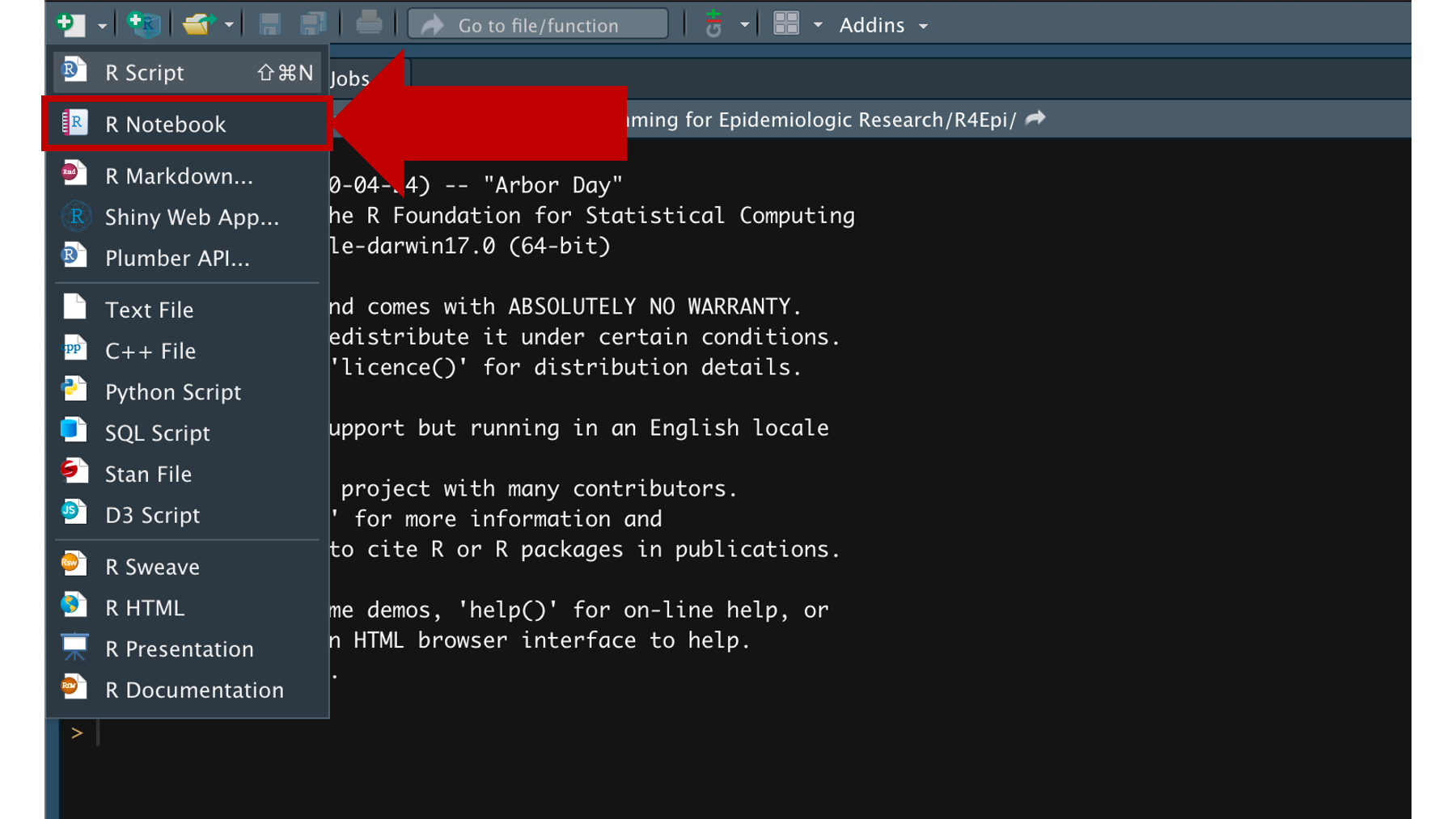 At this point you may have noticed that right below R Notebook in the dropdown menu is an option that says R Markdown... and you may be confused about why we aren’t choosing that option. Great observation! As I said at the beginning of this chapter, R markdown files have a ton of functionality. Usually, when things have a ton of functionality (e.g., phones, cars, computers) it comes at a cost. That cost is complexity. R markdown files are no exception. They are awesome, but it can take some time to learn how to take advantage of all they have to offer. R Notebooks ARE R markdown files, but they have some default settings that make it quick and easy for us to jump right into using them for doing some interactive R coding.

After you click the R Notebook option in the dropdown menu, a new untitled R Notebook file will appear in the source pane. This R Notebook will even include some example text and code meant to help get you started. We are typically going to erase all the example stuff and write our own text and code, but for now I will use it to highlight some key components of R markdown files. 8.6 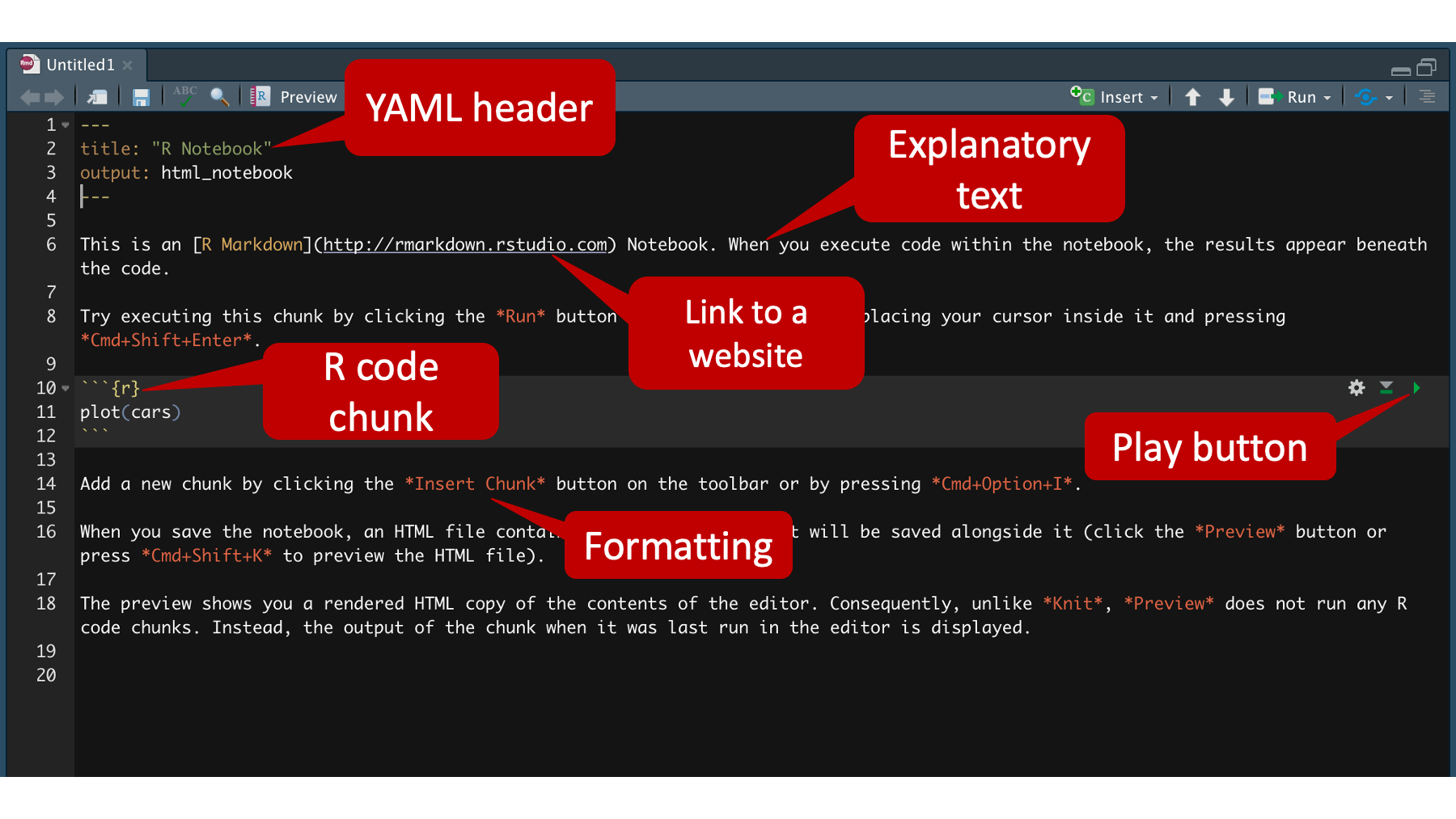 Figure 8.6: A blank R script in the source pane.

Second, notice lines 10 through 12. These lines make up something called an R code chunk. Code chunks in R markdown files always start with three backticks ( ` ) and a pair of curly braces ({}), and they always end with three more backticks. We know that this code chunk contains R code because of the “r” inside of the curly braces. You can also create code chunks that will run other languages (e.g., python), but we won’t do that in this book. In this book, we will exclusively use the R language. You can think of each R code chunk as a mini R script. We’ll talk more about the details of code chunks soon.

Third, notice lines 6, 8, 14, and 18. These lines contain text instructions to help you use R Notebooks, but in a real analysis you would use formatted text like this to add context around the analysis in the code chunks. For now, you can think of this as being very similar to the comments we wrote in our R scripts. However, this text is actually something called markdown, which allows us to do lots of cool things that the comments in our R scripts aren’t able to do. For example, line 6 has a link to a website embedded in it, and lines 8, 14, 16, and 18 all include text that is being formatted (the orange text wrapped in asterisks). In this case, the text is being italicized.

And that is all you have to do to create an basic R Notebook. Next, I’m going to give you a few more details about each of the key components of the R Notebook that I briefly introduced above.

What does an HTML Notebook look like? Well, if you hit the Preview button in RStudio: 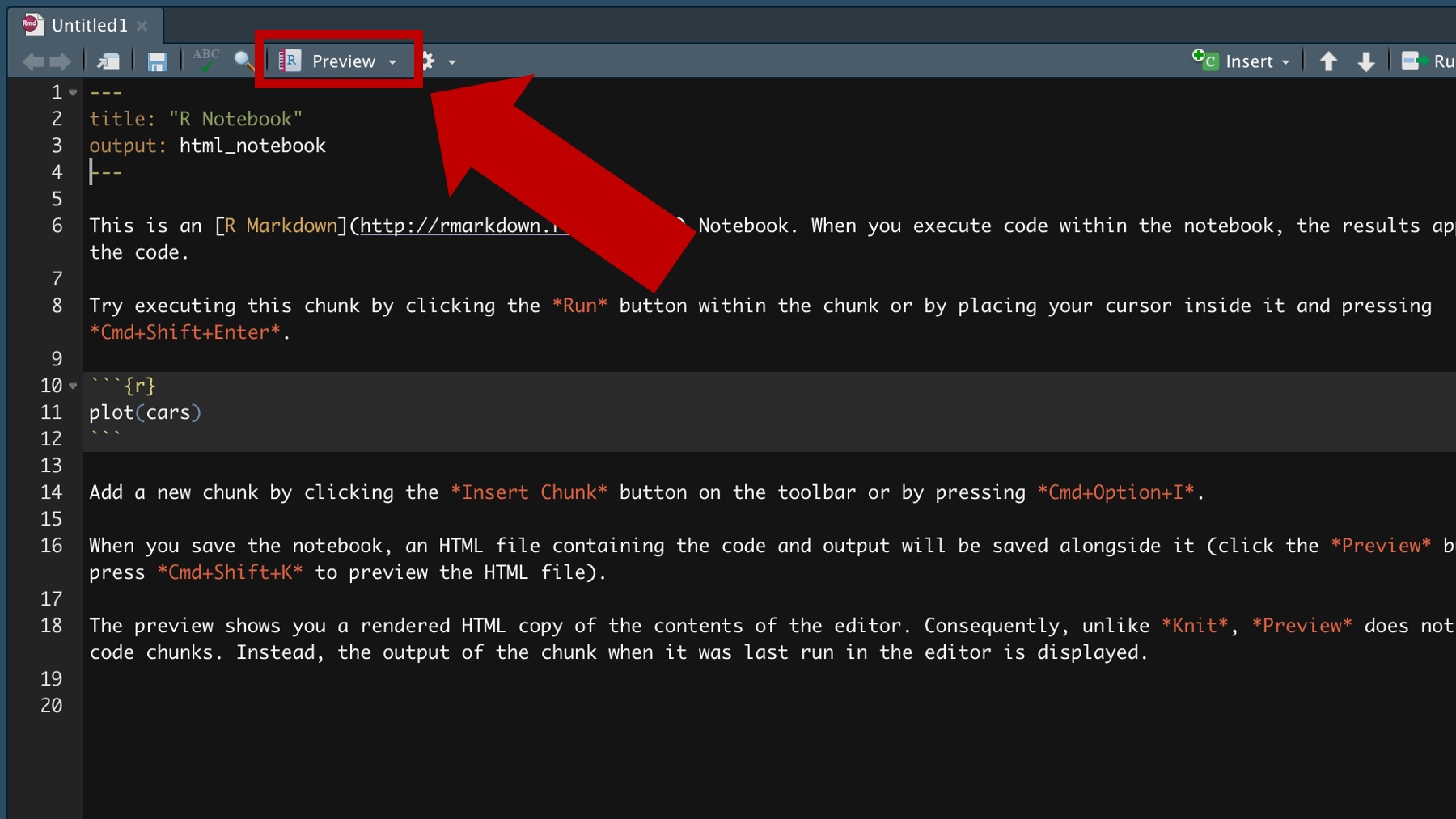 Figure 8.7: RStudio’s preview button. Only visible when an R Notebook is open. 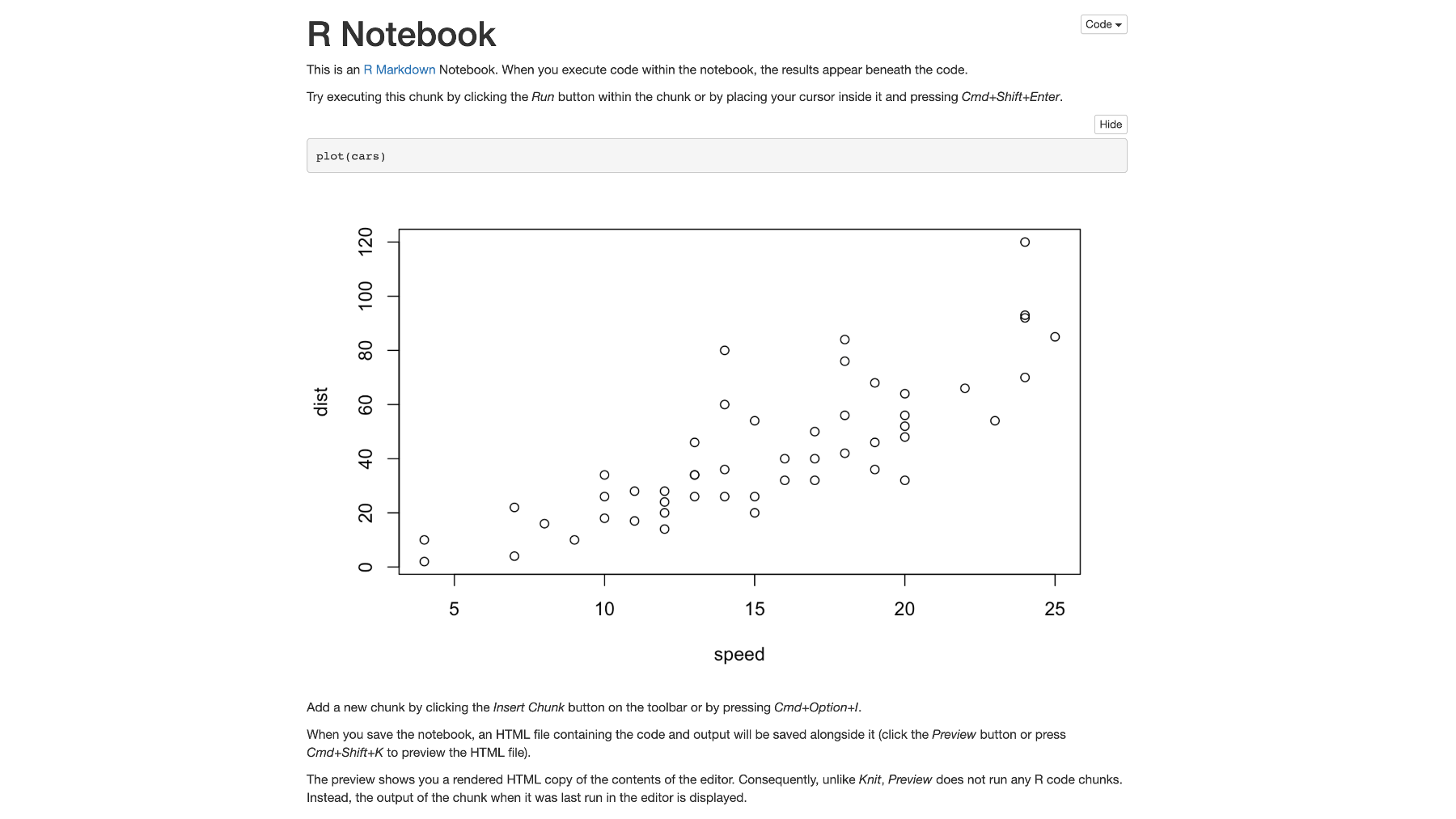 Notice how all the formatting that was applied when R rendered the HTML Notebook file. For example, the title – “R Notebook” – is in big bold letters at the top of the screen, the words “R Markdown” in the first line of text are now a clickable link to another website, and the word “Run” in the second line of text is now italicized.

I can imagine that this section may seem a little confusing to some of you right now. If so, don’t worry. You don’t really need to understand the YAML header right now. Remember, when you create a new R Notebook file in the manner I described above, the YAML header is already there. You will probably want to change the title, but that’s about it.

As I said above, R code chunks always start out with three backticks ( ` ) and a pair of curly braces with an “r” in them ({r}), and they always end with three more backticks. Typing that over and over can be tedious, so RStudio provides a keyboard shortcut for inserting R code chunks into your R markdown files.

On Windows type control + alt + i

Inside your code chunk, you can type anything that you would otherwise type in the console or in an R script. You can then click the little green arrow in the top right corner of the code chunk to submit it to R and see the result. 8.9 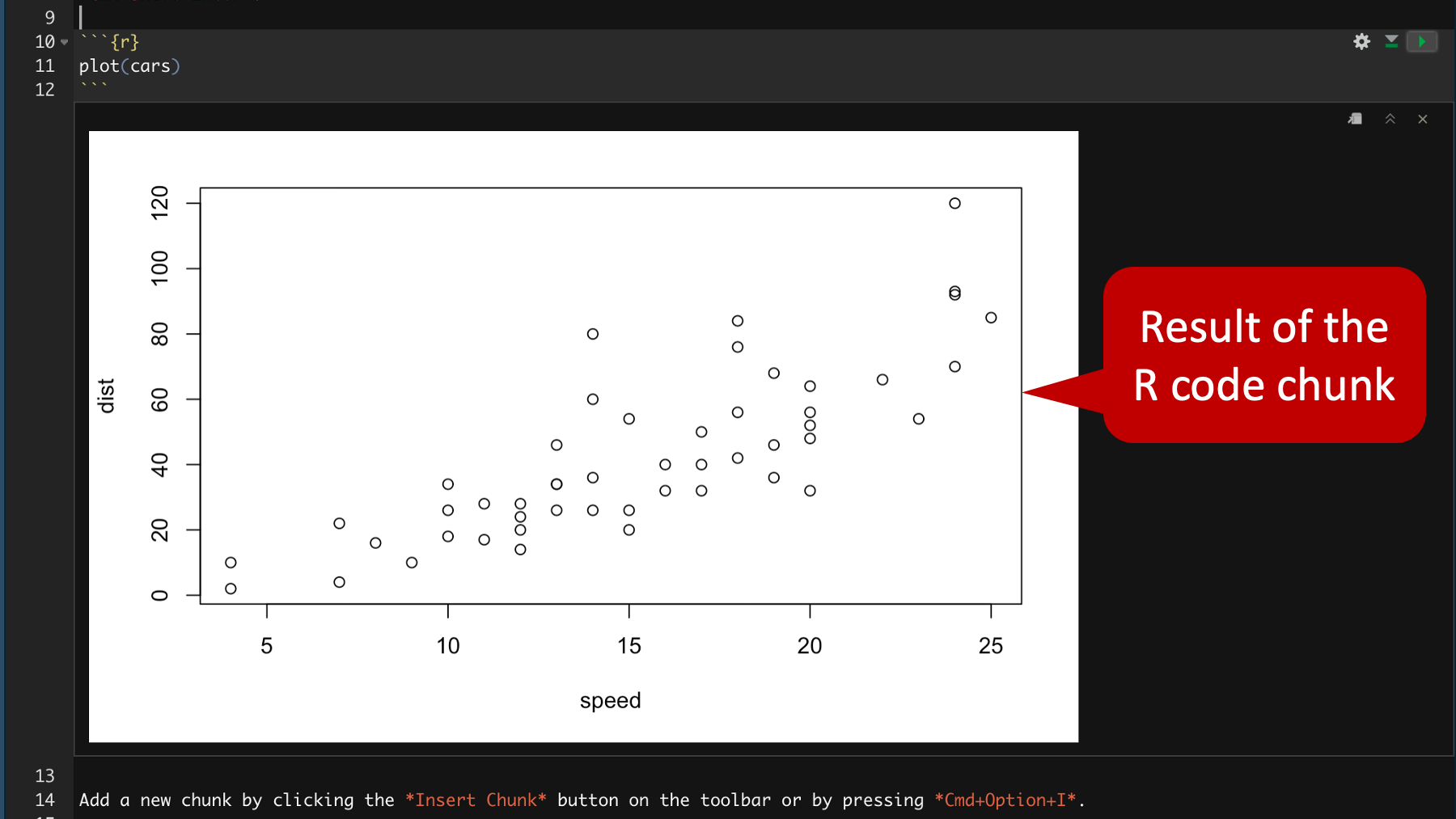 Figure 8.9: The results of an R code chunk embedded in an R Notebook.

Many of you have probably heard of HTML and CSS before. HTML stands for hypertext markup language and CSS stands for cascading style sheets. Together, HTML and CSS are used to create and style every website you’ve ever seen. Remember that R Notebooks created from our R markdown files are HTML files. They will open in any web browser and behave just like any other website. Therefore, you can manipulate and style them using HTML and CSS just like any other website. However, it takes a lot of time and effort to learn HTML and CSS. So, markdown was created as an easier-to-use alternative. Think of it as HTML and CSS lite. It can’t fully replace HTML and CSS, but it is much easier to learn, and you can use it to do many of the main things you would want to do with HTML and CSS.

For example, in figures 8.6 and 8.8 you saw that wrapping your text with single asterisks (*) italicizes that text, and that using a combination of brackets and parentheses [Text](Link) can turn your text into a clickable link.

There are a ton of other things you can do with markdown, and I recommend checking out RStudio’s R markdown cheat sheet if you’re interested in learning more. You can download it (any many other cheat sheets) here. The cheat sheet is a little bit busy and may feel overwhelming at first. So, I suggest starting with the section called “Pandoc’s Markdown” on the second page of the cheat sheet. Just play around with some of the formatting options and get a feel for what they do.

Having said that, it’s totally fine if you don’t care to try to tackle learning markdown syntax right now. You don’t really need markdown to follow along with the rest of the book. However, I still suggest using R Notebook files for writing, saving, modifying, and sharing your R code – even if you don’t plan to format them with markdown syntax.