In the last chapter we learned that there are many different file types that one can use to store data. We also learned how to use the readr package to import several different variations of plain text files into R.

In this chapter, we will focus on data stored in binary files. Again, you can think of binary files as being more complex than plain text files and accessing the information in binary files requires the use of special software. Some examples of binary files that I have frequently seen used in epidemiology include Microsoft Excel spreadsheets, SAS data sets, and Stata data sets. Below, we will learn how to import all three file types into R. 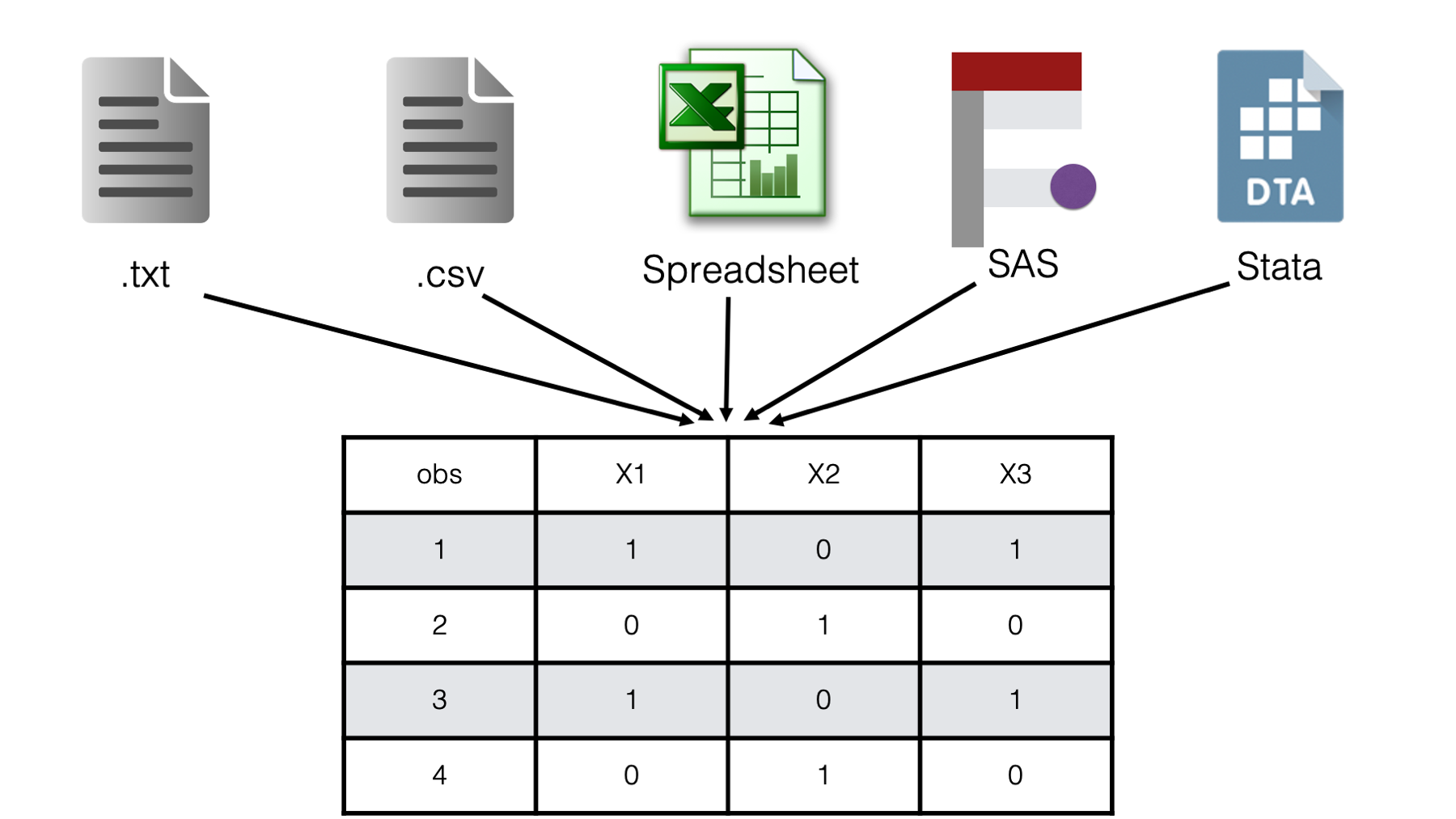 Technically, base R does not contain any functions that can be used to import the binary file types discussed above. However, the foreign package contains functions that may be used to import SAS data sets and Stata data sets, and is installed by default when you install R on your computer. Having said that, we aren’t going to use the foreign package in this chapter. Instead, we’re going to use the following packages to import data in the examples below. If you haven’t done so already, I suggest that you go ahead and install these packages now.

I’m probably sent data in Microsoft Excel files more than any other file format. Fortunately, the readxl package makes it really easy to import Excel spreadsheets into R. And, because that package is maintained by the same people who create the readr package that you have already seen, I think it’s likely that the readxl package will feel somewhat familiar right from the start.

I would be surprised if any of you had never seen an Excel spreadsheet before – they are pretty ubiquitous in the modern world – but I’ll go ahead and show a screenshot of our height and weight data in Excel for the sake of completeness. 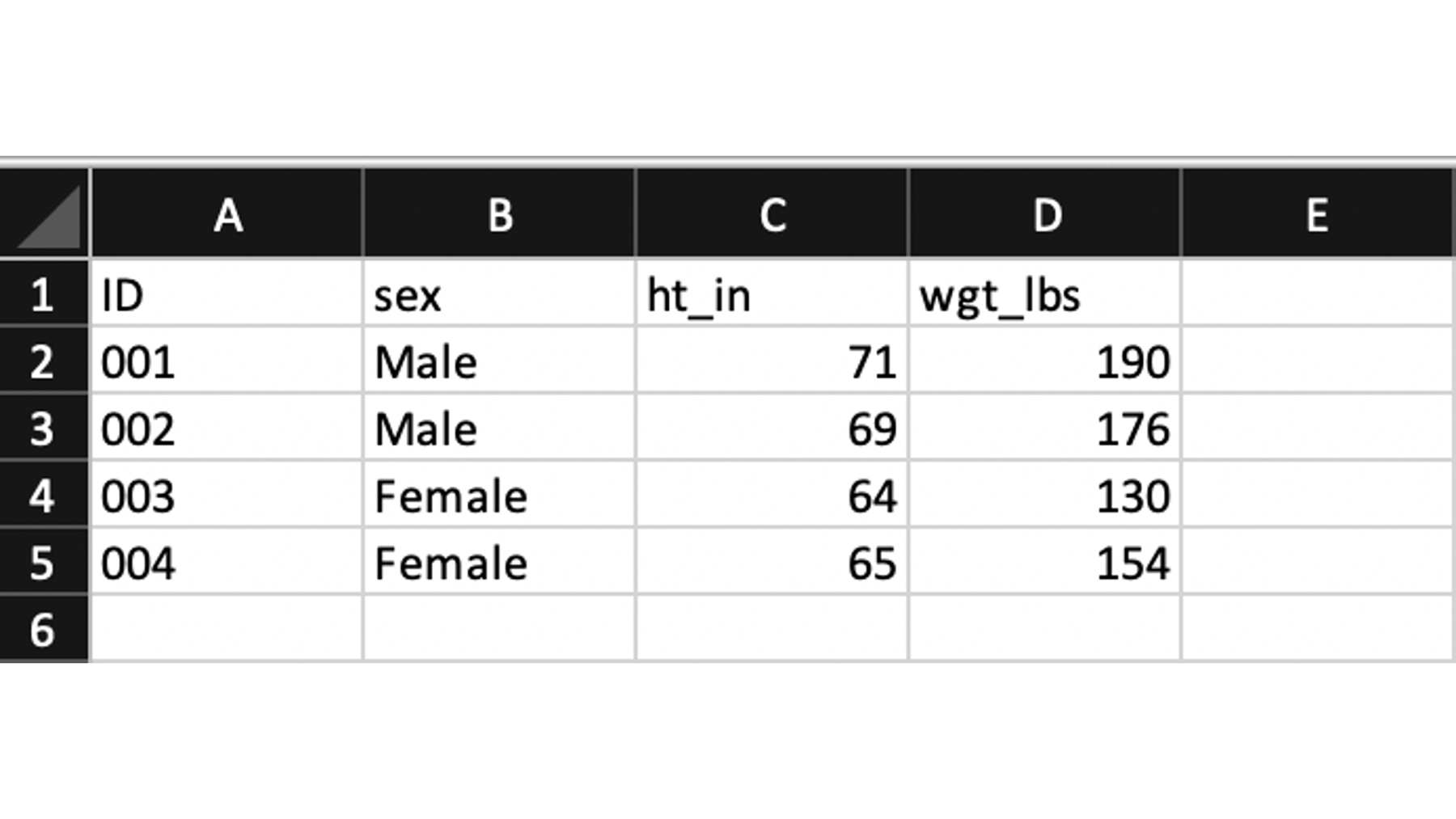 All we have to do to import this spreadsheet into R as a data frame is passing the path to the excel file to the path argument of the read_excel() function.

⚠️Warning: Make sure to always include the file extension in your file paths. For example, using “/excel” instead of “/excel.xlsx” above (i.e., no .xlsx) would have resulted in an error telling you that the filed does not exist.

Fortunately for us, just passing the Excel file to the read_excel() function like this will usually “just work.” But, let’s go ahead and simulate another situation that is slightly more complex. Once again, we’ve received data from a team that is using Microsoft Excel to capture some study data. 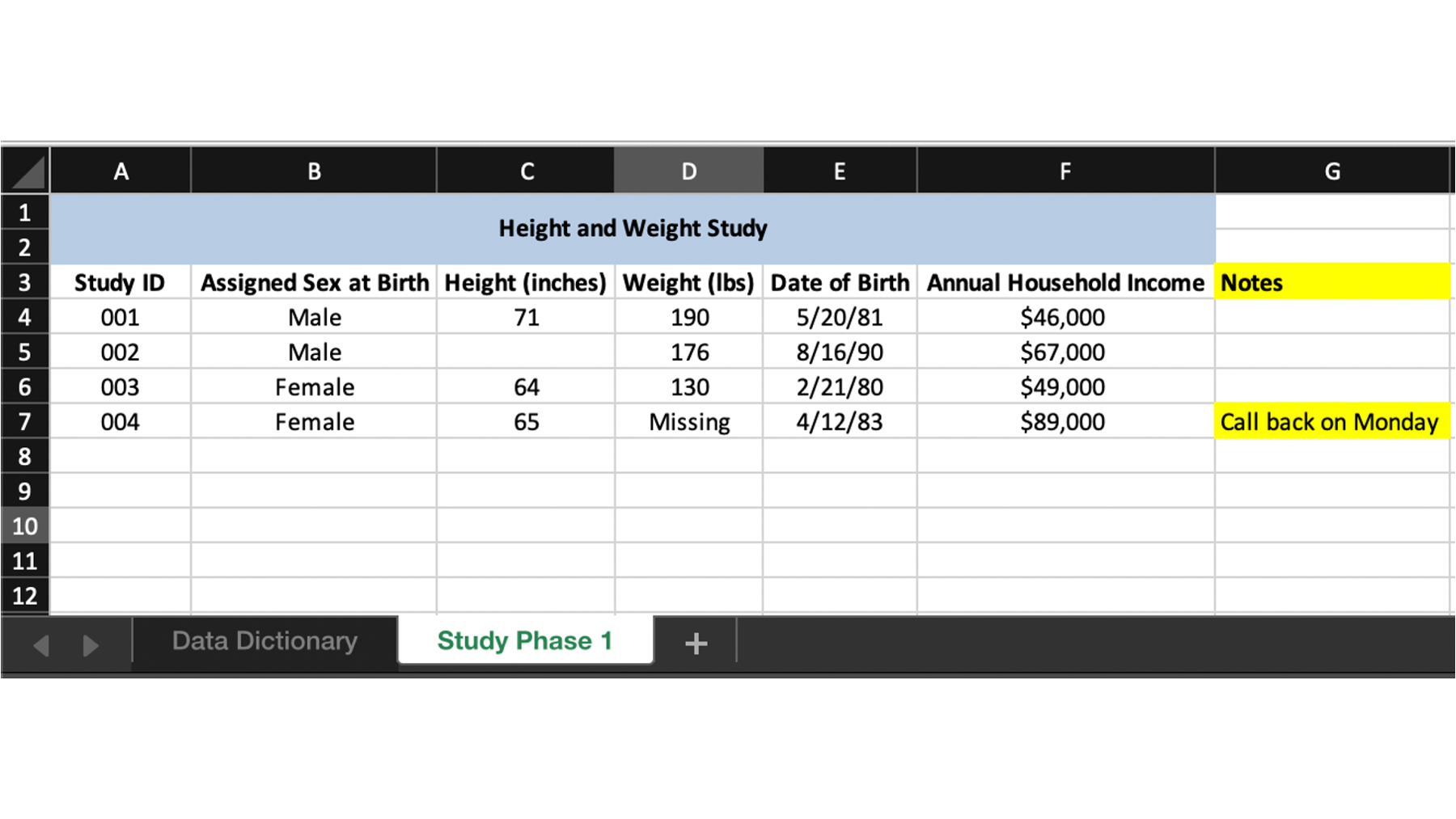 As you can see, this data looks very similar to the csv file we previously imported. However, it looks like the study team has done a little more formatting this time. Additionally, they’ve added a couple of columns we haven’t seen before – date of birth and annual household income.

As a final little wrinkle, the data for this study is actually the second sheet in this Excel file (also called a workbook). The study team used the first sheet in the workbook as a data dictionary that looks like this: 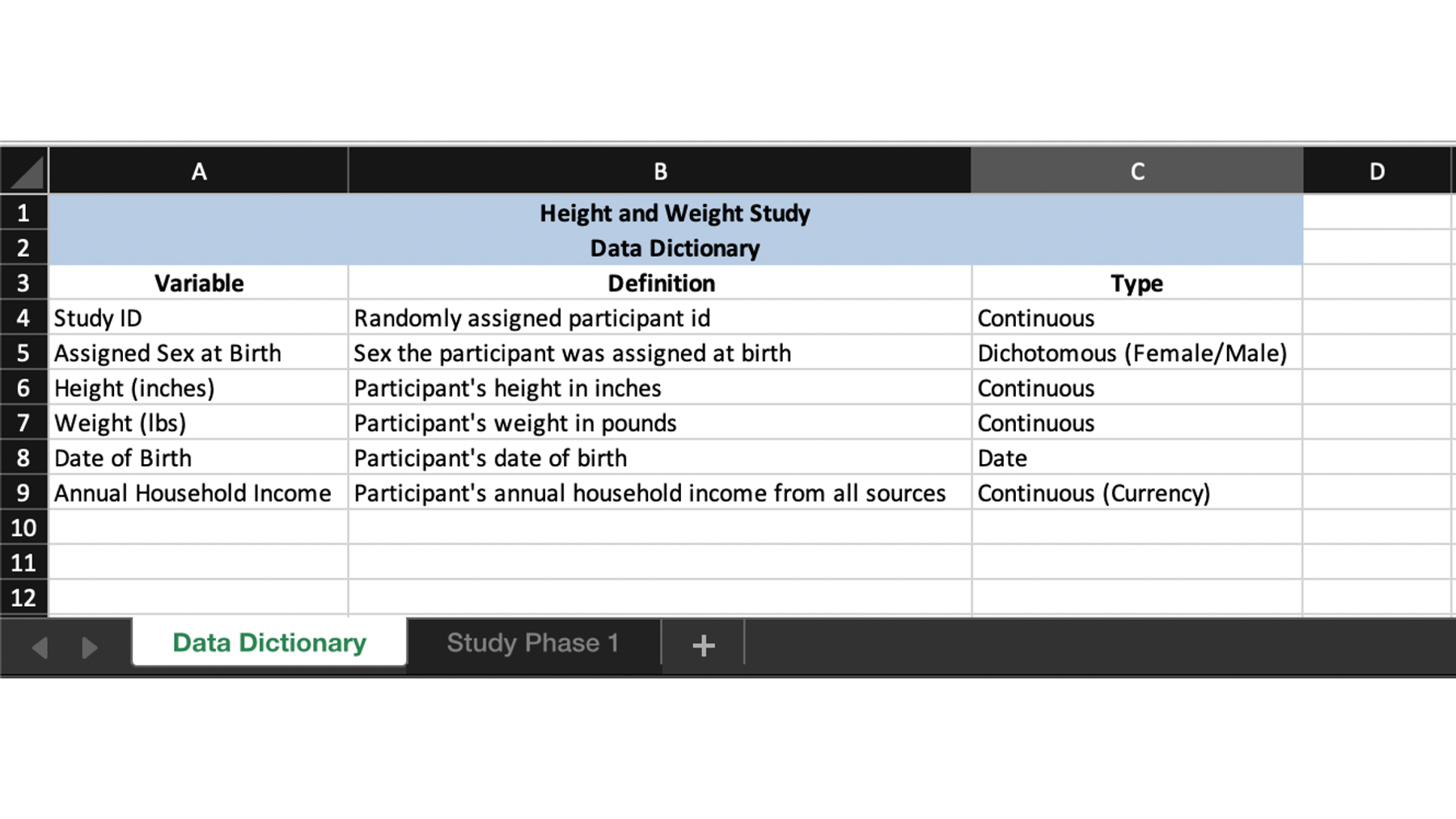 Once again, we will have to deal with some of the formatting that was done in Excel before we can analyze our data in R.

We’ll start by taking a look at the result we get when we try to pass this file to the read_excel() function without changing any of read_excel()’s default values.

As I said, the readr package and readxl package were developed by the same people. So, the code above looks similar to the code we used to import the csv file in the previous chapter. Therefore, I’m not going to walk through this code step-by-step. Rather, I’m just going to highlight some of the slight differences.

You should be able to import most of the data stored in Excel spreadsheets with just the few options that we discussed above. However, there may be times were importing spreadsheets is even more complicated. If you find yourself in that position, I suggest that you first check out the readxl website here.

Many applications designed for statistical analysis allow you to save data in a binary format. One reason for this is that binary data formats allow you to save metadata alongside your data values. Metadata is data about the data. Using our running example, the data is about the heights, weights, and other characteristics of our study participants. Metadata about this data might include information like when this data set was created, or value labels that make the data easier to read (e.g., the dollar signs in the income variable).

In my experience, you are slightly more likely to have problems importing binary files saved from other statistical analysis applications than plain text files. Perhaps because they are more complex, the data just seems to become corrupt and do other weird things more often than is the case with plain text files. However, in my experience, it is also the case that when we are able to import binary files created in other statistical analysis applications, doing so requires less adjusting of default values. In fact, we will usually only need to pass the file path to the correct read_ function.

Below, we will see some examples of importing binary files saved in two popular statistical analysis applications – SAS and Stata. We will use the haven package to import both.

In order to import a SAS data set, we typically only need to pass the correct file path to haven’s read_sas() function.

In addition to SAS data sets, data that has been altered in SAS can also be saved as a SAS transport file. Some of the national, population-based public health surveys (e.g., BRFSS and NHANES) make their data publicly available in this format.

You can download the 2018 BRFSS data as a SAS Transport file here. About halfway down the webpage, there is a link that says, “2018 BRFSS Data (SAS Transport Format)”. 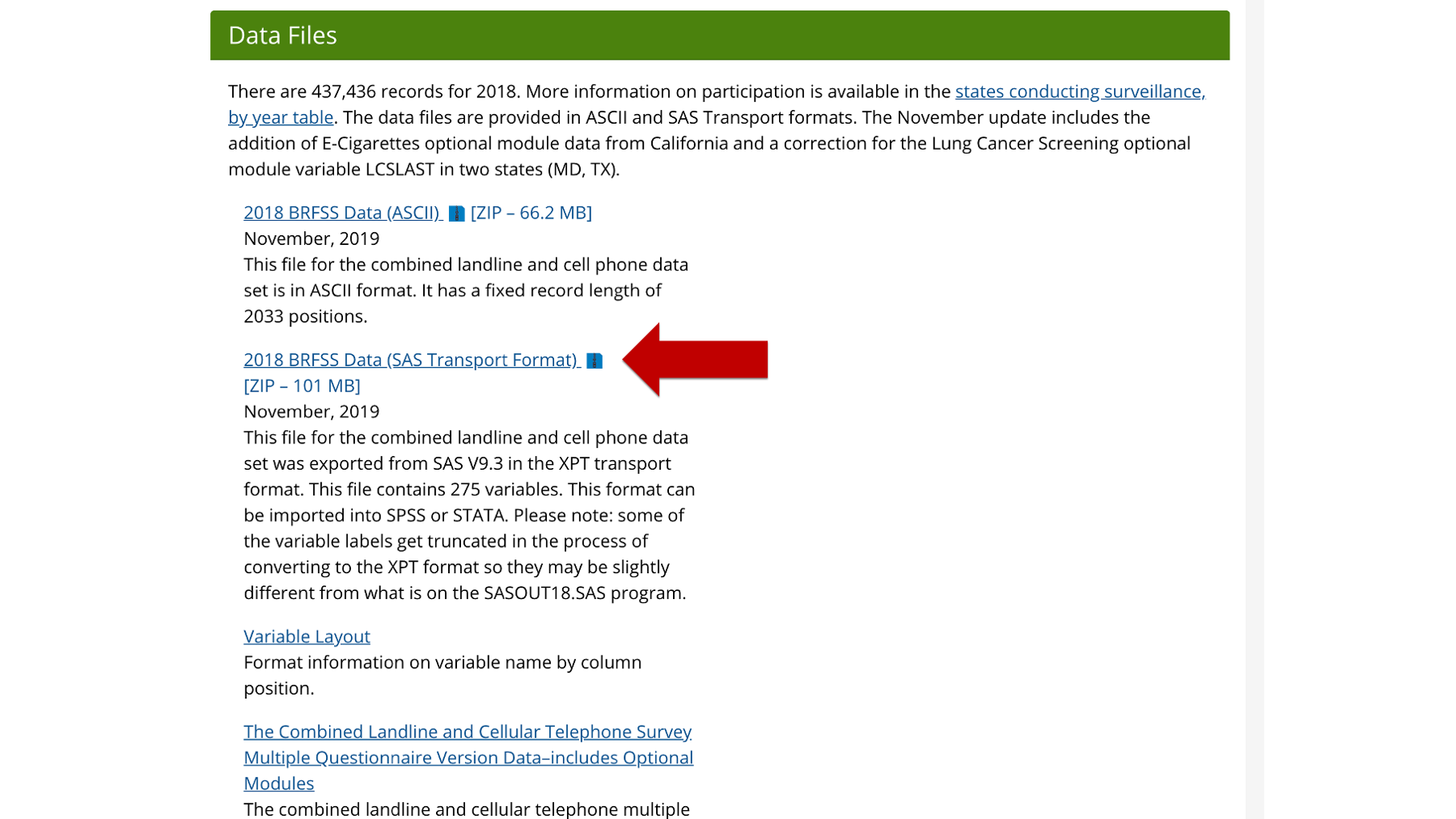 Clicking that link should download the data to your computer. Notice that the SAS Transport file is actually stored inside a zip file. You can unzip the file first if you would like, but you don’t even have to do that. Amazingly, you can pass the path to the zipped .xpt file directly to the read_xpt() function like so:

For example, you can download the 2017-2018 NHANES demographic data as a SAS Transport file here 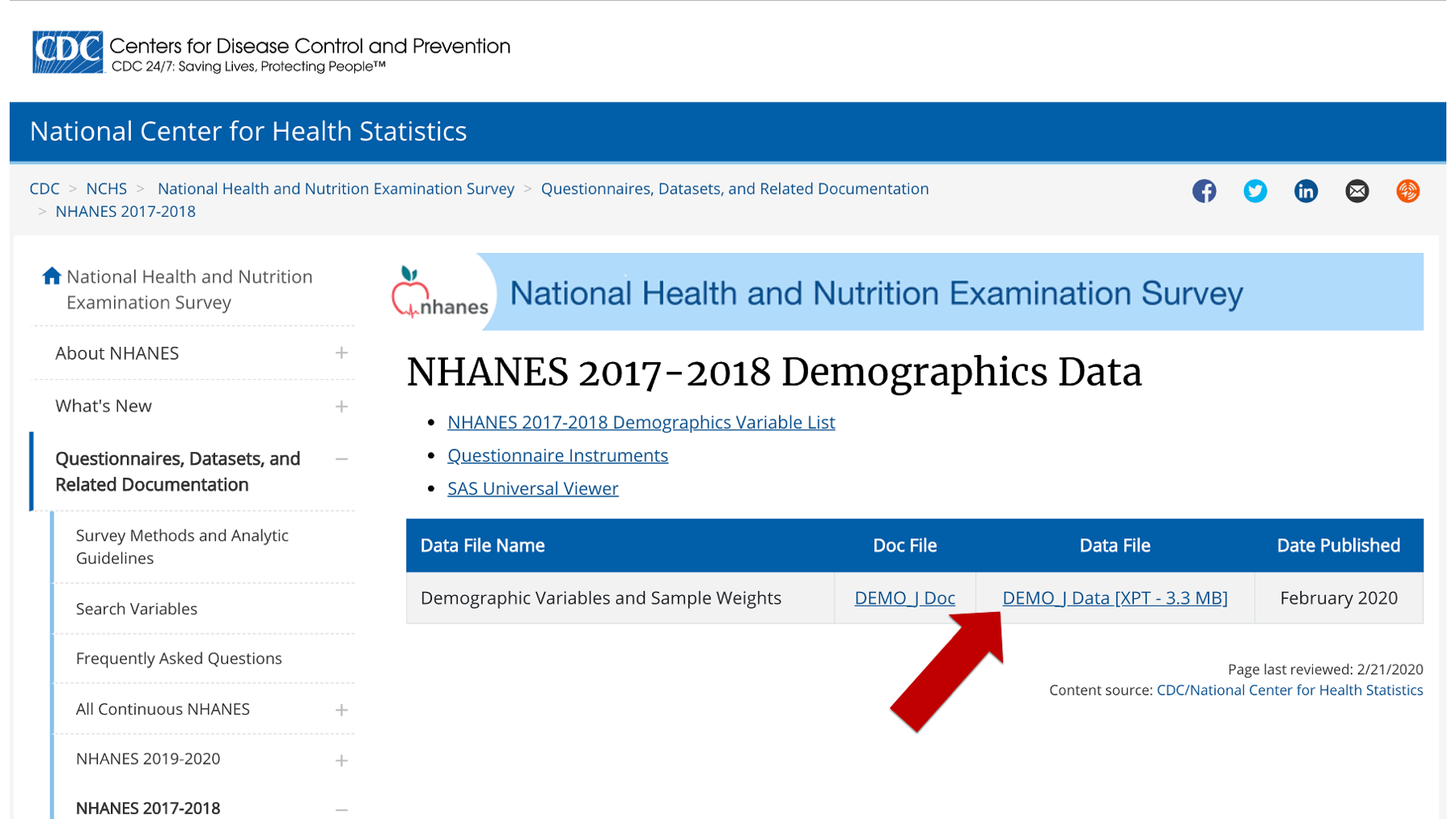 If you right-click on the link that says, “DEMO_I Data [XPT - 3.3 MB]”, you will see an option to copy the link address. 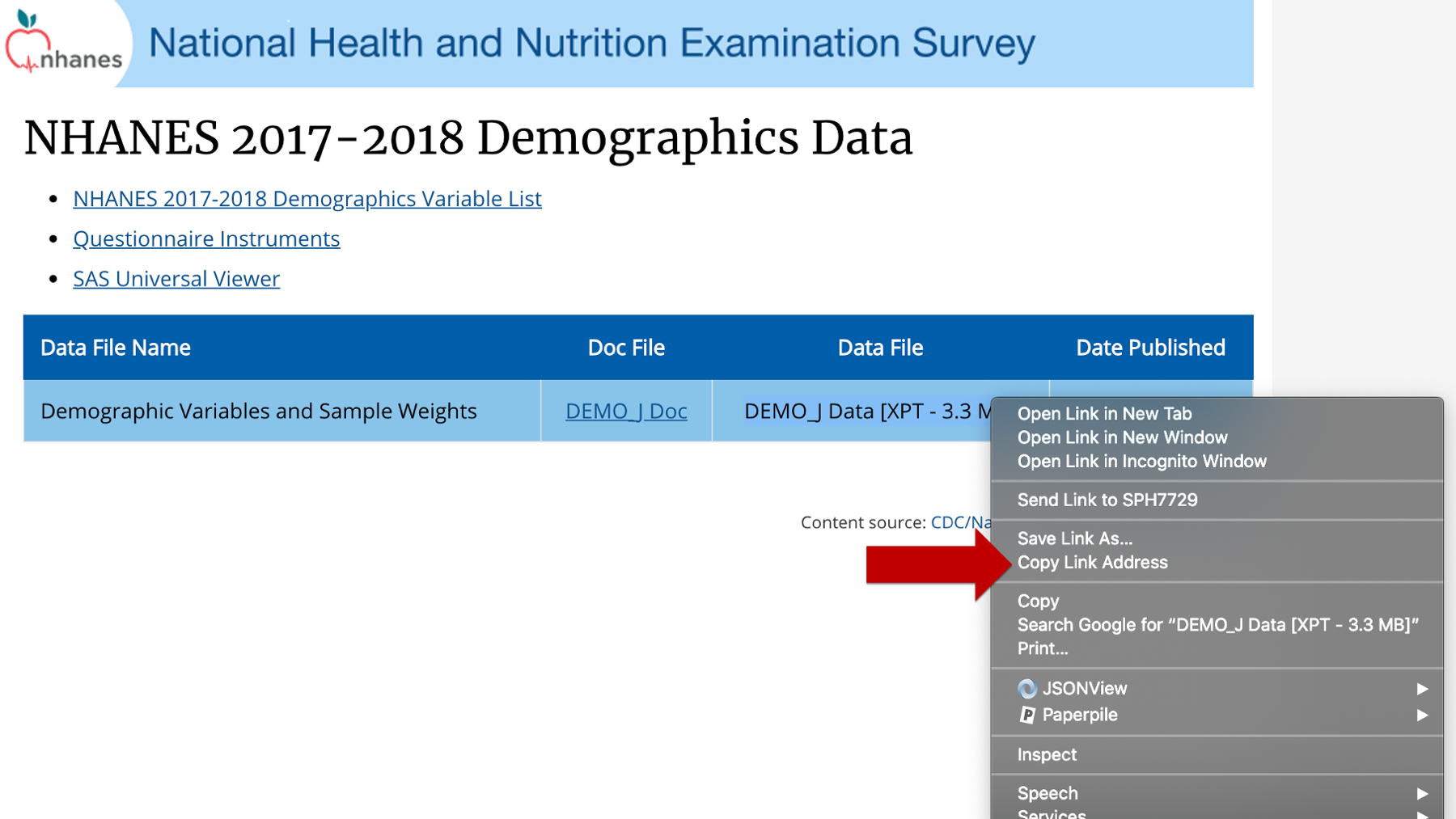 Finally, we will import a Stata data set (.dta) to round out our discussion of importing data from other statistical analysis software packages. There isn’t much of anything new here – you could probably have even guessed how to do this without me showing you.

You now know how to write code that will allow you to import data stored in all of the file formats that we will use in this book, and the vast majority of formats that you are likely to encounter in your real-world projects. In the next section, I will introduce you to a tool in RStudio that makes importing data even easier.